On Eve Of UK General Election, Theresa May Tries To Put Focus Back On Brexit

Pollsters still expect May's Conservatives to win, although talk of a landslide majority of more than 100 seats has faded. 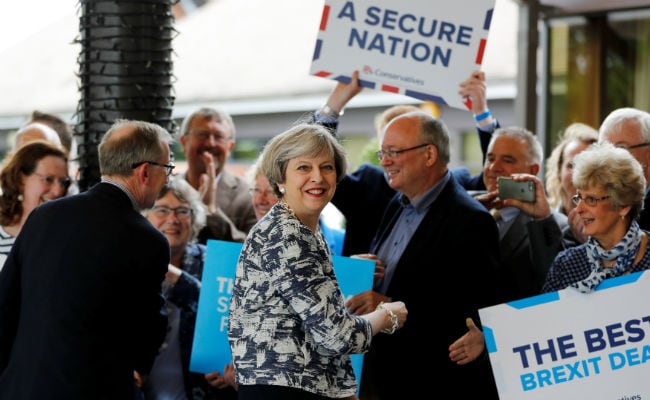 NORWICH/LONDON: On the eve of an election Prime Minister Theresa May returned to her core message that only she can deliver a good Brexit deal, moving on from a heated national debate over security after two deadly Islamist attacks. May unexpectedly called the snap vote seven weeks ago, seeking to increase her working parliamentary majority of 17 seats ahead of the start of negotiations on leaving the European Union. But the campaign has seen unexpected twists - a steep decline in May's once-commanding poll lead over the opposition Labour Party, and attacks in Manchester and London that killed 30 people.

Pollsters still expect May's Conservatives to win, although talk of a landslide majority of more than 100 seats has faded. A final flurry of polls put her party's lead in a range between 1 and 12 percentage points, with most of them suggesting she would increase her majority.

The polls started narrowing after May launched a new policy on care for the elderly that proved unpopular. She backtracked days later, prompting opposition parties to pour scorn on her claim to offer "strong and stable leadership".

Then came a suicide bombing at a pop concert in Manchester on May 22 that killed 22 children and adults, and a van and knife attack on London Bridge and in nearby Borough Market that killed eight people on June 3, five days before the election.

The attacks threw the campaign spotlight onto security and prompted questions from May's opponents and media about her record overseeing cuts in police numbers during her years as interior minister from 2010 to 2016.

But the security issue was not seen as helpful to her main rival, Labour leader Jeremy Corbyn, who has voted against counter-terrorism legislation and expressed reservations in the past about police shoot-to-kill tactics.

On Wednesday, the eve of the vote, May tried to bring the campaign back to Brexit.

"When it comes to the election tomorrow, I think the choices and the questions that people need to ask are exactly the same today as they were right at the beginning of the campaign," she told a campaign rally in Norwich, eastern England.

"And the first is a question of who do you trust to actually have the strong and stable leadership that is going to deliver the best deal for Britain in Europe."

May has sought to portray Corbyn as the weak leader of a spendthrift party which would crash Britain's $2.5 trillion economy and lead the country to ruin in chaotic Brexit negotiations.

Corbyn, a veteran left-winger who unexpectedly won the Labour leadership in 2015 after three decades on the party fringe, has hit back that Conservative fiscal austerity has hurt the poor and increased social inequalities. 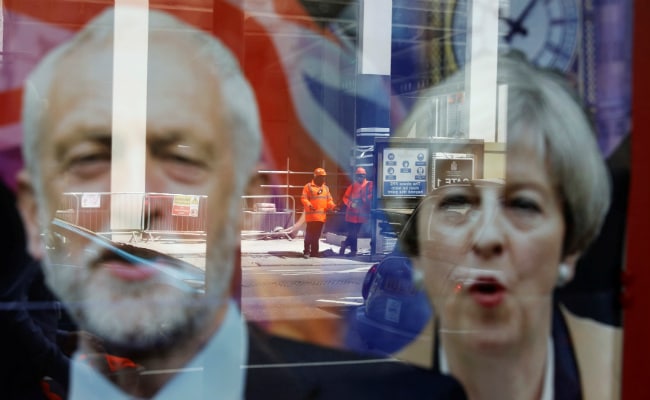 Labour propose to build a fairer society through policies such as increasing tax for the richest 5 percent, boosting workers' rights, scrapping university tuition fees and investing 250 billion pounds in infrastructure.

For May, the challenge is not only to win but to surpass handsomely the 12-seat majority her Conservative predecessor David Cameron won in 2015.

A narrow victory would undermine her authority both inside her party and at talks with the 27 other EU leaders.

Up to five more opinion polls are expected before voting begins at 0600 GMT on Thursday.

Britons have until 2100 GMT to vote, and there will be an exit poll as soon as voting ends. The first handful of seat results are expected to be announced by 2300 GMT, with the vast majority of the 650 constituencies due to announce results between 0200 GMT and 0500 GMT on Friday morning.

London police were still dealing with the fallout from Saturday night's attack, when three terrorists drove a van into pedestrians on London Bridge before running into narrow streets bustling with nightlife, stabbing and slashing people indiscriminately.

They said they arrested three more people on Wednesday and searched two locations in connection with the attack. They have also made 25 arrests for hate crimes since Saturday and had stepped up their presence in communities to provide reassurance.

With the capital still jittery, police carried out a controlled explosion near the site where a new U.S. embassy is being built in southwest London because of two suspicious vehicles, but later said it had been a false alarm.

Police confirmed on Wednesday the Saturday death toll had risen to eight after they found a body in the River Thames. They also made another arrest in east London in connection with the attack.

The dead include people from France, Australia, Canada, Spain and Britain. The attack left 48 injured, of whom 29 were still in hospital on Wednesday. Health authorities said 10 were in a critical condition.

Security has been increased nationwide and the violence has dominated the final weeks of campaigning.

May responded to the attack with a pledge to crack down on Islamist extremism and strengthen police powers.

"If human rights laws get in the way of doing these things, we will change those laws to make sure we can do them," she said in an interview with the Sun.

The head of campaign group Amnesty International said the pledge was outrageous and a gift to autocratic leaders around the world.

Two of the three London Bridge attackers, who were all shot dead at the scene by police, had been known to authorities beforehand.

Italy said it had flagged Youssef Zaghba as a potential risk after he moved to England last year, while Khuram Butt was known to British security services.

(This story has not been edited by NDTV staff and is auto-generated from a syndicated feed.)
Comments
Theresa MayMay on brexitUK Elections 2017