Theresa May, Back In Parliament Amid Brexit Chaos, Is No Longer Target

Those who know her say Theresa May is unlikely to make a move that will draw attention, breaking a tradition of former British leaders who loomed large over the nation's politics after leaving office. 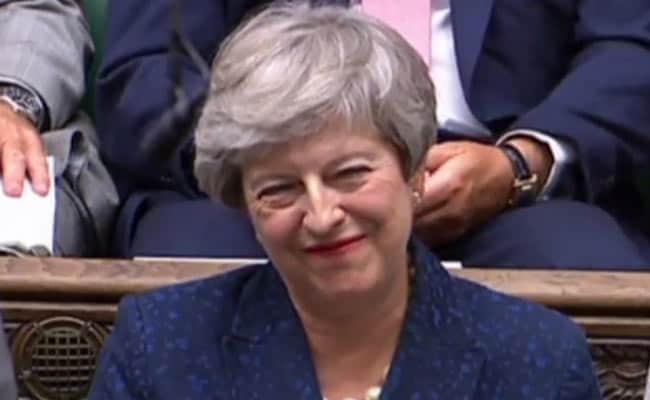 Whatever Theresa May does, most of it will likely go unnoticed on a national stage.

As Prime Minister, Theresa May was direct in her criticism of lawmakers in Britain's parliament, whom she accused as recently as March of "infighting," "political games and the arcane procedural rows."

Now, more than a month after she resigned amid a lack of confidence in her ability to oversee an orderly British exit from the European Union, she sits in parliament among the very lawmakers she so pointedly criticized.

With her successor and fellow Conservative Party member Boris Johnson losing his parliamentary majority on Tuesday amid larger opposition from within his own party, speculation has swirled around how May will handle her role as a rank-and-file lawmaker.

Will May join the rebellion against Johnson as some have suggested after she chose to watch cricket instead of attending Johnson's first speech as prime minister? Or will she back him in his effort to suspend parliament during a critical period ahead of the Oct. 31 Brexit deadline?

Those who know her say May is unlikely to make a move that will draw attention, breaking a tradition of former British leaders who loomed large over the nation's politics after leaving office.

Chris Wilkins, a former director of strategy for May when she occupied 10 Downing Street, said May will most likely support Johnson.

"The fundamental thing that I think people need to understand about Theresa May is that she has been part of the fabric of the Conservative Party since her teenage years," Wilkins said in an interview. "Doing anything now that is seeking to sort of destabilize or criticize the party is just very, very unlikely from her."

Rosa Prince, who wrote a biography of May, agreed that the former prime minister is unlikely to rebel easily.

There is the possibility May "very reluctantly feels pushed at the last moment" to prevent the no-deal Brexit Johnson is open to - and puts "her country over her party," Prince said.

Whatever May does, most of it will likely go unnoticed on a national stage.

Even though May's return to Parliament as a backbencher is nothing unusual in British history - former Prime Minister Margaret Thatcher and David Cameron, among others, did the same - some hope she will do so with the intent of serving the constituency that put her there.

After long struggling to find a footing in politics, she eventually won in the district of Maidenhead - and she has been "repaying the favor ever since," Prince said.

As Home Secretary and later on as prime minister, May continued to meet with members of her constituency over the weekend, shopped in the local supermarket and attended church on Sundays.

May's deep connection to her home district could foreshadow the way she seeks to make use of her remaining time in parliament.

She is likely to "stay clear of a lot of the drama that's going on, particularly in the next few weeks and months, but she'll prove quite active for her constituency," Prince said. May could also become a stronger advocate for issues she has prioritized in the past, including combatting modern-day slavery or empowering women in politics.

Cameron stood down as a lawmaker shortly after he announced his resignation as prime minister. While his critics slammed Cameron, suggesting he had always been more interested in his own career than in representing his voters, Cameron said he was afraid he would become a "distraction."

Staying in parliament "was just going to be difficult" for him, said Cameron's former deputy chief of staff Kate Fall, as everyone would know how he is voting.

He and other former prime ministers - including former Labor party leader Tony Blair - went on to obtain lucrative corporate contracts. Cameron has also been writing his memoir.

"I doubt there's going to be a huge market for [May's] memoirs," said Tim Bale, a professor of politics at Queen Mary, University of London. "She's probably...not likely to sort of cash in on her time as prime minister."