He is now expected to table a motion for an early election before parliament on Wednesday, with the poll date expected before a crucial EU summit on October 17 and 18. 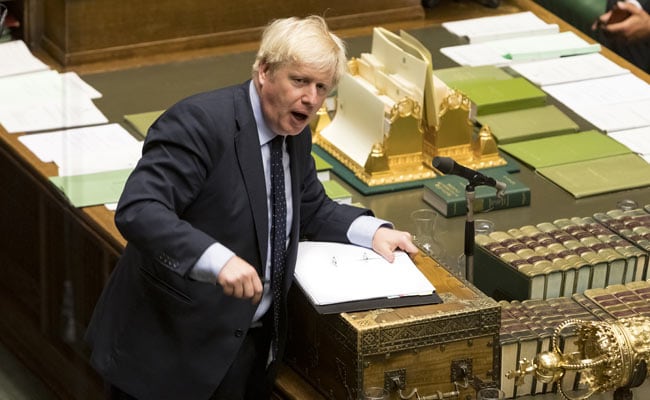 Prime Minister Boris Johnson raised the prospect of a snap election on Tuesday after he suffered a major parliamentary defeat over his Brexit strategy that could delay Britain's exit from the European Union.

Just six weeks after taking office, the Conservative leader was hit by a huge rebellion among his own MPs that leaves him without a working majority in the House of Commons as he looks to take Britain out of the EU on October 31.

Twenty-one Conservatives joined opposition MPs to begin the process of drafting legislation that could stop a "no deal" exit by delaying the departure date by three months.

The prime minister had earlier warned that rebels who voted against him would be expelled from the party, while one other Conservative, former minister Philip Lee, dramatically defected to the pro-European Liberal Democrats.

Addressing braying MPs immediately after the vote, in which the government was defeated 328 votes to 301, Johnson said he had no option but to move to call an early general election.

Shouting to make himself heard, he warned the rebels' proposal would hand control over Brexit to Brussels, causing "more delay and more confusion" in the already tortuous departure process.

"I don't want an election but if MPs vote tomorrow to stop the negotiations and to compel another pointless delay of Brexit, potentially for years, then that will be the only way to resolve this," he said.

Aides had previously said any poll would be held before a crucial EU summit on October 17 and 18.

A vote on holding an election is now expected on Wednesday, although it is by no means certain to succeed.

It requires the support of two-thirds of MPs and opposition Labour leader Jeremy Corbyn warned that while he wanted an election, he wanted to get through the "no deal" plan first.

Johnson took over as premier in July promising to finally deliver on the 2016 referendum vote for Brexit, after his predecessor Theresa May delayed exit day twice.

He says he wants to agree a divorce deal with Brussels, but insists if this is not possible, Britain should leave the EU next month regardless.

However, there are not yet any formal negotiations with the EU and MPs are increasingly fearful of a disorderly divorce, which they believe could cause significant economic damage.

The heightened political tension sent the British pound tumbling on Tuesday to its lowest level against the dollar in almost three years.

The successful vote makes time in the House of Commons on Wednesday to introduce legislation that could force Johnson to delay Brexit to January 31 if he cannot agree an EU deal by October 19.

MPs are racing to get the bill through before parliament is suspended next week, in what Corbyn said "may be our last opportunity" to prevent a chaotic Brexit.

Responding to Johnson's election call, the Labour leader said: "He wants to table a motion for a general election. Fine -- get the bill through first in order to take no deal off the table."

"Coming out of the EU with no deal at all is the worst possible option," said John Wetherall, a retired chemical engineer carrying EU flags.

Johnson insists his threat to leave the EU without a deal will ultimately force the bloc to sign up to new terms to ease the end of Britain's 46-year membership.

But his critics warn this is wishful thinking, while governments on both sides of the Channel are stepping up preparations for a disorderly divorce.

Johnson's finance minister on Tuesday announced another 163;2 billion pounds (2.2 billion euros, $2.4 billion) of funding to deal with Brexit, to be spent on boosting border guards and port infrastructure.

Leaked government assessments have warned that no-deal could lead to food, fuel and medicine shortages, but ministers insist they can prepare for much of this.

UN economists also on Tuesday warned that Britain could lose at least $16 billion (14.6 billion euros) a year on exports to the European Union if it left without a deal.

On a day of high drama, an Edinburgh court also heard a legal challenge against Johnson's decision to suspend parliament next week for more than a month, with the ruling expected Wednesday.