The images were captured by researchers from the San Diego Zoo who have been studying leopards in the Loisaba wildlife conservancy, as well as an independent photographer working in the region at the same time. 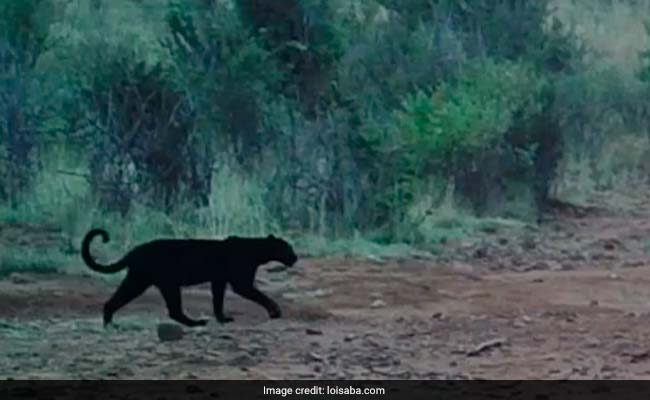 The study said photos represent first scientific confirmation in a century of black leopard in Africa.

Whispers of sightings of the elusive black leopard have long swirled around central Kenya, and scientists have now confirmed its presence there with a series of rare images taken by camera traps.

The images were captured by researchers from the San Diego Zoo who have been studying leopards in the Loisaba wildlife conservancy, as well as an independent photographer working in the region at the same time.

"We are very excited to hear that these camera traps have captured rare footage of melanistic leopards, otherwise known as black panthers!" the conservancy said on its website.

Melanism is a genetic mutation like albinism, except it leads to a surplus in pigment that turns the fur or skin of an animal black.

The study, led by San Diego Zoo researcher Nicholas Pilfold and published in the African Journal of Ecology in January, said the photos represent the first scientific confirmation in a century of the black leopard's presence in Africa.

The last confirmed report was a photograph taken in Addis Ababa in 1909 that is stored in the Museum of National History in the United States.

In Kenya, a captive black leopard was photographed in 2013 while other images taken from a helicopter circulated in 2018. However, the latest photos represent the first recorded scientific evidence.

Pilford told AFP that after receiving numerous reports of sightings of the leopard, his team set up eight camera traps in February 2018, and within three months had snapped a sub-adult female.

He estimates there are "definitely two, possibly three" in the region.

"By far, these are the best, most intimate images we have of a black leopard in Africa, there hasn't been anything like this before."

Any big cat species with melanism is referred to as a black panther, such as black leopards in Asia and Africa and black jaguars in the Americas.

According to Pilford, only 11 percent of leopards across the globe are black.

Pilford's team worked in parallel with photographer Will Burrard-Lucas, who used his personally-designed Camtraptions camera trap to capture images of the same leopards in the region, and released them alongside the study.

Black leopards are well documented in South East Asia, but little is known about their presence in Africa.

The irony of the scientific paper coming out not long after the 2018 box office success of Marvel's Black Panther, based in the fictional African nation of Wakanda -- which is said to border Kenya -- was not lost on Kenya's twittersphere.

Even Lupita Nyong'o -- who hails from Kenya and starred in the movie -- hailed the "unreal" sighting on Twitter.

"I find the coincidence to be kind of unique. I looked up where Wakanda is and the way the Marvel comic universe is drawn, it is not that far away from our study area," said Pilford.