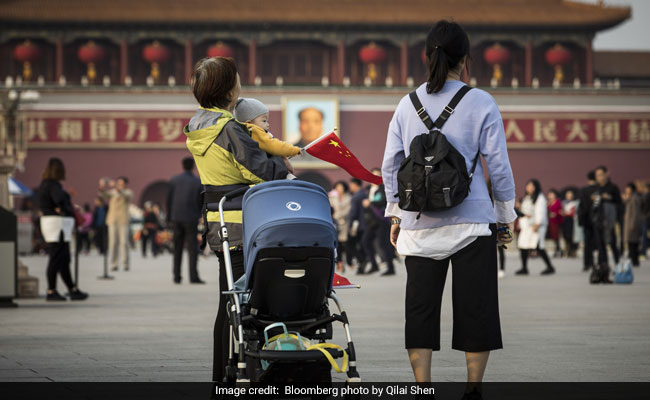 The cash crunch is the result of a baby drive by Chinese officials worried that a rapidly aging population poses a threat to economic growth. China eliminated the one-child policy in 2016 after almost four decades and since then almost every province has extended terms of maternity leave to encourage women to have more children.

Paid leave for mothers of newborns -- which the government in 2012 mandated at 98 days -- averaged between 138 and 158 days last year depending on the location, according to the China Daily. Insurance plans run by provincial or city governments pay the costs of maternity leave, with the money coming from mandatory contributions by employers.

The system doesn't always cover all of the costs of maternity leave. As regional governments offer more benefits, some employers are likely to discriminate against women because of concerns they will become pregnant, said Lyu Xiaoquan, a lawyer from Beijing Qianqian Law Firm who represents women in cases related to maternity-leave policies.

"The ultimate solution would be for the government and company to co-bear the costs," Lyu said.

As regional governments have offered more generous leave policies, payments have increased. In 2016, the most recent year for which statistics were available, Chinese maternity insurance funds had 53.1 billion yuan ($8.2 billion) in expenses, exceeding by 900 million yuan the amount companies paid into insurance funds, according to the National Bureau of Statistics of China.

That was the first time an annual deficit was posted since the office started reporting the data on a yearly basis in 2000. Payments exceeded premiums in 12 provinces or cities.

There's no immediate crisis, owing to surpluses accumulated before the one-child limit was lifted. While China hasn't yet published statistics about maternity-fund inflows and outflows for 2017, there were 17.2 million births last year, down 3.5 percent from 2016. That drop should ease pressure on the insurance system.

Still, even in 2015 there were three provinces or cities, including Beijing, in which maternity payments exceeded revenues. As they look at the long-term implications of promoting bigger families and longer maternity leaves, officials are acknowledging the stress the current employer-funded system faces.

The Ministry of Human Resources and Social Security in March issued a notice requiring provinces to pay maternity-related expenses in full and on time. The notice mandated that governments establish risk-alert mechanisms for maternity insurance funds and required them to keep enough in accumulated balances to cover six to nine months of payments.

That followed an August directive detailing steps governments should take when there are deficits in funds paying for maternity benefits as well as pensions, unemployment benefits, worker compensation and medical insurance.

The central government opened a new administration in May overseeing maternity and health insurance to lower costs while improving coverage, according to the Xinhua News Agency. The administration reports directly to the State Council, the highest level in the government hierarchy.

"This is good news for female employees," said Pan Jintang, a professor at the School of Labor and Human Resources of Renmin University in Beijing. "Combining the capital pool of different insurance funds can guarantee that female employees can get reimbursement for maternity insurance."

The move follows a pilot program in a dozen cities last year to expand access to maternity insurance by incorporating that system into basic medical insurance plans, potentially reducing costs.

Finding a solution is crucial if China is to avoid the demographic problems facing Japan and other Asian and European countries with low birth rates. By 2030, about a quarter of China's population will be 60 or older, the State Council said last year, up from 13 percent in 2010.

China's government is planning to scrap all limits on family size as soon as this year, a move that could further strain the system of employer-funded maternity leave.

Maternity-benefits expenses are small compared with other mandatory contributions of employers. Yet the system already puts pressure on some employers by not fully compensating them for the salaries of women on leave, said K. Lesli Ligorner, a Shanghai-based partner with Morgan, Lewis & Bockius who specializes in employment law.

"Insurance doesn't cover all of it and the employer is responsible for paying anything above that," she said.

Experts say discrimination against pregnant women in the workplace persists. Some companies require women to sign contracts stipulating that they won't get pregnant, according to Geoffrey Crothall, communications director for China Labour Bulletin, a Hong Kong-based group that promotes workers' rights. Others try to impose onerous conditions on pregnant employees in the hope that they'll quit before maternity leave starts, he said.

"A lot of employers simply will not hire women because they are worried they will have to pay for maternity insurance and that's not something they want to bother with," Crothall said.

Chinese law protects women from being fired because of pregnancy or maternity leave and courts are showing more willingness to consider complaints from plaintiffs alleging wrongful termination, according to attorney Jonathan Isaacs, head of the China employment practice at Baker McKenzie in Hong Kong.

However, because Chinese courts don't consider punitive damages for most employment cases, he said, the amounts awarded to successful plaintiffs are still small. "They're nothing near the level to make companies really pay attention," he said.

Changes to the maternity benefits system are part of a broader effort to improve China's social safety net, with the State Council on July 1 scheduled to introduce a program to help local governments make pension payments.

Such reforms show "the central government's determination to improve people's livelihoods at a time when China's population is rapidly aging," Xinhua has reported.

(This story has not been edited by NDTV staff and is auto-generated from a syndicated feed.)
Comments
Xi JinpingChinaChina Population