Chernobyl Emerges From Oblivion For The Streaming Generation

The world nearly forgot about its worst nuclear disaster. Now HBO's hit drama is bringing visitors to the site of the tragedy. 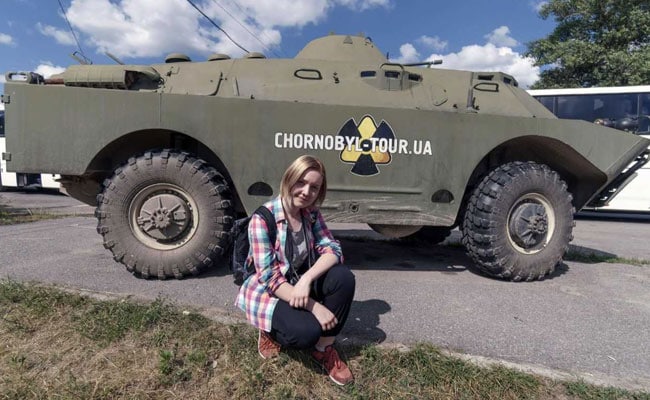 A tourist poses beside an APC like those used during the cleanup of Chernobyl.

Olha Kyselova wasn't born when the Chernobyl power plant exploded in 1986, yet the disaster has always been in her life. Her parents were "liquidators," sent in to brave the radiation and help clear the area of deadly materials. Then they charted hotspots for more than a decade.

But it wasn't until she sat with them in their Kiev apartment and watched HBO's hit dramatization of the world's worst nuclear catastrophe that she finally decided to see the place with her own eyes. So she booked onto Chornobyl-Tour and joined 44 other tourists getting a close-up.

"My parents said it was very accurate and so I wanted to see the site of the tragedy and understand it better," Kyselova, 24, a graphic designer, said as the tour bus stopped at the entrance of the exclusion zone for documentation checks.

Notorious as it is, Chernobyl risked fading into the mist of the Cold War past as new generations grow up with their own traumas. For Ukrainians, it's the ever-present conflict with Russia. For others, it's the Sept. 11 terrorist attacks, 2004 tsunami or the more recent nuclear disaster in Fukushima.

For years, the Ukrainian government struggled to maintain awareness and help raise money for a new containment structure, which was finally completed in 2017. Now Chernobyl is attracting a fresh wave of attention. Chornobyl-Tour expects 150,000 bookings by the end of the season, twice the number of visitors last year, largely because of the five-part TV docudrama. Google statistics show a sharp jump in searches for Chernobyl in recent weeks, including in Ukraine.

Anti-nuclear activists are trying to capitalize on the 33-year-old cautionary tale returning to the public consciousness just as former eastern bloc countries Bulgaria and the Czech Republic consider building new reactors. As policymakers grapple with the future of nuclear power, access to the Chernobyl exclusion zone can stir public opinion enough to reawaken the debate over the technology's long-term risks, they say.

"People had totally forgotten," said Jan Haverkamp, a senior expert on nuclear energy at Greenpeace in Amsterdam. "But the series opened it up again and I am very happy about that."

Reactor No. 4 exploded on April 26, 1986 when it was just two years old. The blast spewed radioactive rubble including fuel-rod material and graphite hundreds of meters into the sky, making sections of the countryside about 115 kilometers (70 miles) from the capital Kiev unfit for habitation for the next 24,000 years.

While the Soviet government tried to immediately quash public knowledge of the explosion-including among its own citizens-clouds of gases and radiation quickly spread across Europe. The explosion led to a mass evacuation of the area, including the now-abandoned town of Pripyat and small villages that dotted what is now known as the exclusion zone.

Most of the tourists on the bus with Kyselova, hailing from such countries as India, Sweden, Ireland and the U.S., had booked themselves for the visit before the airing of the HBO series, which traces the story of the disaster from the moment of the explosion through the containment and cleanup efforts.

The one-day tour covers Pripyat, a Soviet-style lunch, the inter-ballistic early warning radar system in the forest and the plant itself. Many discovered the opportunity through social media posts, word of mouth or from Ukrainian tourist websites, said Olena Gnes, one of two guides leading visitors around the remains of a farmhouse being eaten up by the forest.

"They're curious and why is that?" said Gnes. "They want to learn, they want to see with their own eyes that this is an important part of our history, not only for Ukraine, but for all of the world. My hair still stands on end."

Most of those on the eight-hour tour held fast to the belief that there is a place for nuclear power in the world as coal and oil-fired electricity plants become more undesirable. Many felt, like Polish engineer Bartosz Tobaka, 29, that the current technology and safety systems won't allow a repeat of what happened at Chernobyl.

At Pripyat, the city that was carved out of the forest within view of the power plant for workers and their families in 1970, visitors saw the stark reality of how a way of life was changed in an instant. A former preschool building is still lined with rusty children-sized bed frames and first-year readers strewn across a leaf-covered floor.

"I'm just getting chills," said Robin Charlesworth, a retired Houston resident who came with her husband from Texas to Kiev to meet Ukrainian Rotary colleagues and decided to take a side trip to Chernobyl.

Once a bustling community of 47,500 residents, Pripyat is now almost invisible because of the encroaching wilderness.

The riverside restaurant, with its Soviet-style stained glass windows, is covered with moss. The empty indoor swimming pool echoes the quiet footsteps of visitors and the parquet floor of the basketball court is fast becoming pulp.

"This really is like the town that time forgot," whispered Barclays Plc banker Paul Kelly, 39, as he approached a row of bleachers with blackened wooden bench slats coiled upward to the sky from the forgotten soccer stadium.

Chornobyl-Tour founder Sergei Mirnyi is involved in helping get the plant and its surrounding region declared a Unesco protected site. That would allow funding to be made available for protecting the area.

"It's obvious that Chernobyl is an event of global importance, very meaningful and very symbolic," said Mirnyi. "It opened a new page in the history of our civilization."

Like others, Kyselova had been open to the possibility of safe nuclear power. After the tour, which ended in front of the containment shelter that towers about 35 stories above the shuttered plant, she'd changed her mind.

"I just can't imagine all the emotion these people experienced at the time," Kyselova said. "We have to find something else."