Labour lawmaker Tanmanjeet Singh Dhesi's call for Johnson to apologize came amid a chaotic week for the prime minister who has faced fierce opposition over his Brexit plans. 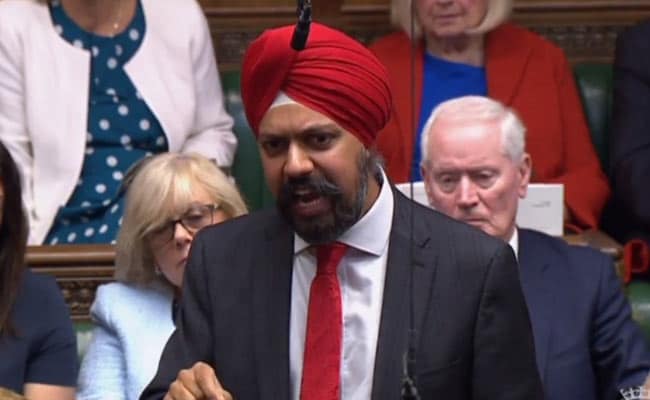 Prime Minister Boris Johnson's first formal question and answer session before parliament on Wednesday was punctuated by an impassioned demand from a Sikh lawmaker that Johnson apologize for "racist" remarks he had made about Muslim women.

Labour lawmaker Tanmanjeet Singh Dhesi's call for Johnson to apologize came amid a chaotic week for the prime minister who has faced fierce opposition over his Brexit plans. Dhesi stood before the House of Commons and confronted Johnson on comments he had made in a 2018 newspaper column comparing Muslim women who wear the ultraconservative niqab to "letterboxes" and "bank robbers."

"When will the prime minister finally apologize for his derogatory and racist remarks" Dhesi said as lawmakers clapped and cheered around him.

"For those of us who from a young age have had to endure and face up to being called names such as towel head or Taliban, or coming from bongo-bongo land, we can appreciate full well the hurt and pain felt by already vulnerable Muslim women when they are described as looking like bank robbers and letterboxes," he added.

Dhesi was referencing a 2018 column written by Johnson in the Telegraph defending Denmark's polarizing burqa ban. In it, he compared Muslim women wearing the garment to "letterboxes," or "bank robbers." The article triggered widespread condemnation in Britain, where there has been a spike in hate crimes against Muslims.

Johnson responded to Dhesi, shouting that his article was a "strong liberal defense" of "everybody's right to wear whatever they want in this country."

He added that he was speaking as someone with Muslim ancestors and Sikh relatives and said his cabinet was the most diverse in Britain's history.

"We truly reflect modern Britain," he said, over jeers from opposition lawmakers.

Footage of Dhesi's remarks were hailed by supporters.

"Proud and emotional to witness @TanDhesi hold Boris Johnson to account for his Islamophobic attack on Muslim women. The House was full of applause. We will not accept Johnson's hard-right politics of hate," lawmaker David Lammy wrote on Twitter.

British advocacy group Hope Not Hate issued a report earlier this year stating that anti-Muslim prejudice was the driving force behind the rise of the far right in an "increasingly divided" Britain.

The report also asked the British government do more to tackle divisive and negative rhetoric by politicians targeting Muslims.

(Except for the headline, this story has not been edited by NDTV staff and is published from a syndicated feed.)
Comments
Prime Minister Boris JohnsonTanmanjeet Singh DhesiBrexit