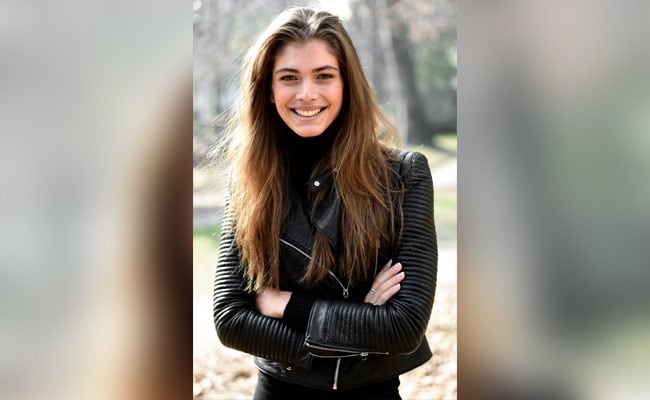 Valentina Sampaio will be flying the flag for the LGBT movement at Milan fashion week. (AFP Photo)

Milan, Italy: Valentina Sampaio, the first transgender model to make the cover of French "Vogue", will be flying the flag for the LGBT movement at Milan fashion week.

The 22-year-old Brazilian, who appeared on the cover of Elle Brazil in November and has modelled for labels such as Gisela Franck and Rchlo, is in the city to attend casting sessions in the hope of snapping up a place on the catwalk for the world's top fashion houses.

The shy, green-eyed brunette told AFP in Milan, where the autumn-winter collections go on show from Wednesday, she was "proud" of being a role model for the lesbian, gay, bisexual, and transgender (LGBT) community.

Her dream, she said, would be to model for the likes of Italian icon Giorgio Armani.

Sitting on a bench in the sunshine, her face lights up as she talks of the opportunities fame and fashion could bring her in the fight to combat transgender prejudice.

Sampaio, who began her modelling career in Brazil four years ago before becoming an "ambassador" for L'Oreal, said landing the coveted cover of Vogue magazine was "important because fashion is a means to stop people speaking about us with prejudice".

While several US fashion magazines have already featured transgender models, this is a first for France.

"I want to continue fighting for a better world" where trans are considered "normal", she says in her soft voice.

The model, who did not once use the words transsexual, transgender or the acronym LGBT in the interview, said she was was tired of those who are not heterosexual or cisgender being seen as "an anomaly".

"Juan is Juan, Maria is Maria and Valentina is Valentina," she said with a laugh.

Transgender is an umbrella term for people whose gender identity differs from the sex they were assigned at birth. Transsexual is an older term that is used by some people who have permanently changed -- or seek to change -- their bodies through medical interventions.

Sampaio, who has about 35,000 followers on Instagram, wowed the Sao Paulo fashion week in October, where she shimmied down the runways for Agua de Coco and Vitorino Campos.

Her life could have taken a different course: she was studying architecture in Fortaleza in north Brazil when she dropped out to attend fashion courses.

The youngster thanks her parents for an upbringing which allowed her to express her gender, saying "as a little boy, I felt like a little girl".

"I was born in Ceara in the northeast and in that small place I felt protected, because everyone knows and respects each other," she said.

Sampaio said there were some unpleasant "incidents" at the beginning of her career, like one brand refusing to use a transgender person for its advertising campaign.

"I felt very bad, I wanted to stop working" as a model, "but in the end I realised that I liked this work and it did not stop me," she said.

Sampaio is part of a group of Brazilian models that fights prejudice and violence against shemales -- transsexuals who have both male genitalia and female secondary sex characteristics.

"The advice I can give them is to believe in themselves and not be discouraged by difficulties," she said.

Promoted
Listen to the latest songs, only on JioSaavn.com
French Vogue, which features Sampaio in a plunging gold gown on the cover of the March edition, described her as a "glam standard-bearer of a cause that is on the march... in a post-gender world".

(This story has not been edited by NDTV staff and is auto-generated from a syndicated feed.)
Comments
Valentina Sampaiofirst transgender modelVogue coverLGBT movementMilan fashion weekBrazil Transgender Model