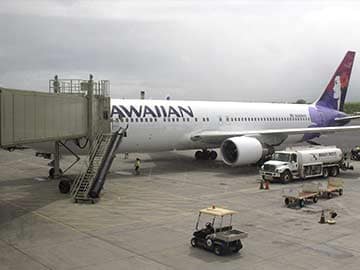 Honolulu: A 15-year-old stowaway who survived a flight over the Pacific in a jet's wheel well spent seven hours undetected in what is supposed to be a highly secure area of San Jose International Airport before the flight departed, according to an official briefed on the investigation.

The law enforcement official told The Associated Press on Tuesday that video surveillance shows the boy on the airfield a little after 1 a.m. Sunday, walking on the tarmac and near airplanes in fenced and guarded areas. The official was not authorized to speak publicly about the case and spoke on condition of anonymity.

While it's not clear how the teen spent all that time, FBI spokesman Tom Simon in Honolulu said the teen was sleeping in the plane before the 8 a.m. PDT takeoff. He "literally just slept on the plane overnight," Simon said.

High altitude and low temperatures knocked him out during the 5 1/2-hour flight; he didn't regain consciousness until an hour after the plane landed in Hawaii, Simon said. Medical experts have said the boy may have survived the subzero temperatures and thin air of the plane's 38,000-foot (11,582-meter) cruising altitude because his body went into a state akin to hibernation.

When the landing gear of a Boeing 767 retracts, there is little room to maneuver in the wheel well. The boy would have had to curl up in the fetal position or crouch down the entire time. And there is no way to get into the main cabin or luggage compartment without removing large pieces of the aircraft's interior, said Jon Day, general manager of Southern California Aviation, a maintenance yard in Victorville, California, that handles commercial jets.

The boy was resting Tuesday at a Honolulu hospital. Hawaii's Department of Human Services said child welfare officials were arranging his safe return to Northern California.

Meanwhile, investigators were struggling to find out how the San Jose airport's post-9/11 security could have been so easily breached.

Besides video surveillance, the airport has German shepherds and Segway-riding police officers and is surrounded by fences, although many sections do not have barbed wire and could easily be scaled.

The Transportation Security Administration said it has spent $80 billion on aviation security since its inception, shortly after the 9/11 attacks. That includes baggage and passenger screening, but not perimeter security, which is the responsibility of local authorities.

San Jose airport officials did not respond to questions about their security budget.

Swalwell said San Jose airport officials told him Tuesday they were still reviewing video from before dawn Sunday because there are multiple feeds from many cameras at the 1,050-acre (424-hectare) airport.

Simon, at the FBI, said video they've found so far shows the teen right after he scaled the fence and going toward the plane.

Promoted
Listen to the latest songs, only on JioSaavn.com
The boy has not been charged with a crime, but much about him - including his identity and his motivation - remained a public mystery. Media were camped outside a Santa Clara, California, home where his family purportedly lives, but no one came out Tuesday. Authorities haven't released the boy's name, but Jennifer Dericco, a spokeswoman for the Santa Clara Unified School District, said that he attends school in the district.

The FAA says about one-quarter of the 105 stowaways who have sneaked aboard flights worldwide since 1947 have survived. Some wheel-well stowaways survived deadly cold and a lack of oxygen because their breathing, heart rate and brain activity slow down.