Belarus authorities released the transcript which shows the Ryanair pilot repeatedly questioning about an alleged bomb threat before agreeing to land in Minsk. 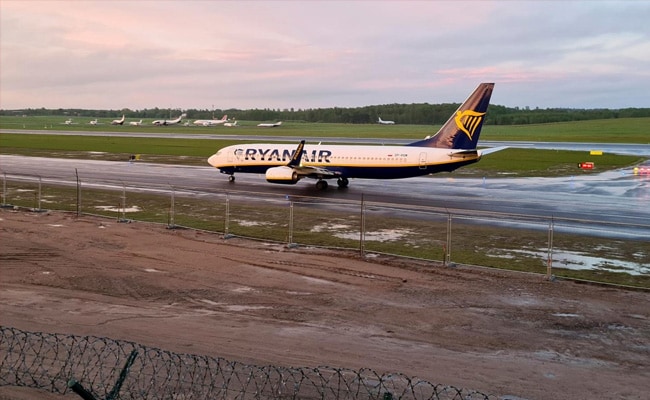 Belarusian authorities arrested a dissident journalist when the Ryanair plane landed in Minsk.

A Ryanair pilot who landed his plane in Belarus on Sunday repeatedly questioned information about an alleged bomb threat, before ultimately agreeing to land in Minsk, according to a transcript released on Tuesday by authorities in Belarus.

Belarus scrambled a warplane to escort the flight, which was en route from Greece to Lithuania

When the plane landed in Minsk, Belarusian authorities arrested a dissident journalist.

Western countries have described the incident as a hijacking or piracy. The transcript released on Tuesday differs from excerpts previously released by Belarus state TV, which had attributed some of the pilot's remarks to the controller.

State TV had pointed to its version to argue that the pilot had asked to land in Minsk, rather than that the controller had advised him to do so. Following are excerpts from the transcript, which Reuters was unable to verify

For clarity, the call sign, RYR 1TZ, which both the pilot and controller repeated when they spoke, has been edited out.

Controller: For your information, we have information from special services that you have bomb on board and it can be activated over Vilnius.

Pilot: Ok, could you repeat the message?

Controller: I say again, we have information from special services that you have bomb on board. That bomb can be activated over Vilnius.

Controller: For security reason we recommend you to land at UMMS (ICAO code for Minsk airport).

Pilot: Ok...that..it..understood give us alternate please.

Pilot: The bomb....direct message, where did it come from? Where did you have information about it from?

ATC: This e-mail was shared to several airports.

Controller: This is our recommendations.

Pilot: Can you say again?

Controller: This is our recommendations.

Pilot: Did you say that your recommendation?

Pilot Agrees To Land In Minsk

Pilot: I need answer the question: what is the code of the (unreadable) green, yellow or amber, red.

Controller: They say code is red.

Pilot: Roger that, in that case we request holding at present position.

Controller: Roger, hold over your position, maintain FL390 turns at own discretion.