Afghanistan-Taliban Crisis LIVE: The last of 6,000 US troops who oversaw a desperate evacuation effort flew out of Kabul airport on Monday night, ending the war that has diminished the United States' status as a superpower. 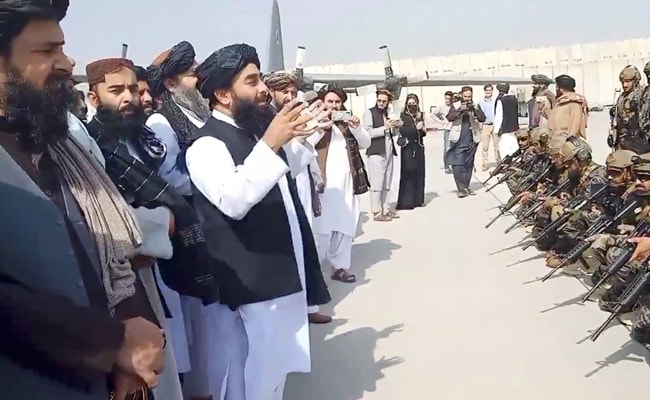 Celebratory gunfire resounded across Kabul on Tuesday as Taliban fighters took control of the airport before dawn, following the withdrawal of the last U.S. troops, marking the end of a 20-year war that left the Islamist militia stronger than it was in 2001.

Shaky video footage distributed by the Taliban showed fighters entering the airport after the last U.S. troops flew out on a C-17 aircraft a minute before midnight, ending a hasty and humiliating exit for Washington and its NATO allies.

"It is a historical day and a historical moment," Taliban spokesman Zabihullah Mujahid told a news conference at the airport after the departure. "We are proud of these moments, that we liberated our country from a great power."

An image from the Pentagon taken with night-vision optics showed the last U.S. soldier to step aboard the final evacuation flight out of Kabul - Major General Chris Donahue, commander of the 82nd Airborne Division.

Here are the LIVE Updates on Afghanistan-Taliban crisis:

One Of History's Biggest Airlifts: Biden Hails US Evacuation From Afghanistan
President Joe Biden called the US airlift of more than 120,000 people from Afghanistan an "extraordinary success" Tuesday, a day after the last US soldiers pulled out of the country.
Sep 01, 2021 02:45 (IST)

No Deadline, Joe Biden Pledges To Get Every American Out Afghanistan
President Joe Biden pledged Tuesday to help scores of US citizens who remain in Afghanistan to leave, a day after the evacuation mission from Kabul airport ended.
Sep 01, 2021 02:35 (IST)

US Drone Strike On Explosives-Laden Car Wiped Out Kabul Family, Says Brother
When Ezmarai Ahmadi returned home from work on Sunday evening in Kabul, the usual gaggle of squealing children was waiting to greet him -- his sons and daughters, and a slew of nieces and nephews.
Sep 01, 2021 02:08 (IST)

"We Are Not Done With You," Joe Biden Warns Afghanistan's ISIS-K Terrorists
US President Joe Biden warned the ISIS-Khorasan, the group which killed 13 US troops in a suicide bombing at Kabul airport, that they face more retribution from Washington.
Sep 01, 2021 01:51 (IST)

Wise Decision, Best Decision: Biden Defends US' Aghanistan Exit
President Joe Biden on Tuesday defended his decision to pull troops out of Afghanistan, saying it was in the US national interest.
Sep 01, 2021 01:50 (IST)

Choice Between Leaving Or Escalating: Joe Biden On US' Afghanistan Exit
The choice for the United States in Afghanistan was either to withdraw from the country or escalate the conflict, President Joe Biden said Tuesday after the final US pullout.
Sep 01, 2021 00:45 (IST)
Under India's Presidency, UN Security Council's Resolution on Afghanistan
The UN Security Council, under India's Presidency, adopted a strong resolution demanding that territory of Afghanistan not be used to threaten any country or shelter terrorists and that it expects the Taliban will adhere to commitments made by it regarding the safe and orderly departure from the country of Afghans and all foreign nationals.

"The whole world has accepted the reality that Taliban will rule #Afghanistan. Even India has adjusted its statements on Taliban. Statements no longer call it a terrorist organisation": Skand Tayal, Former Diplomat pic.twitter.com/NXSy7g71Iq

Aug 31, 2021 11:13 (IST)
Afghanistan-Taliban Crisis: US drone strike wiped out Kabul family, brother says
When Ezmarai Ahmadi returned home from work on Sunday evening in Kabul, the usual gaggle of squealing children were waiting to greet him -- his sons and daughters, and a slew of nieces and nephews.
He pulled his white sedan into the driveway of a modest house in Kwaja Burga, a densely populated neighbourhood in the northwest of the Afghan capital, and handed the keys to his eldest son to park.
Youngsters piled into the vehicle -- pretending the parking routine was an adventure -- while Ezmarai watched from the side.
Then out of the blue Afghan sky, a missile came screeching down -- striking the car with a terrible force and obliterating the lives of 10 people in an instant.
The United States said Sunday it had destroyed an explosive-laden vehicle in an air strike, thwarting a bid by the Islamic State to detonate a car bomb at Kabul airport.
Aug 31, 2021 10:37 (IST)
Taliban celebrate defeating the United States
The Taliban joyously fired guns into the air and offered words of reconciliation on Tuesday, as they celebrated defeating the United States and returning to power after two decades of war that devastated Afghanistan.
The last of 6,000 US troops who oversaw a desperate evacuation effort flew out of Kabul airport on Monday night, ending the war that has diminished the United States' status as a superpower.
Taliban fighters quickly swept into the airport and fired weapons into the sky in jubilation, an astonishing return after US forces invaded in 2001 and toppled the hardline Islamists for supporting Al-Qaeda.
"Congratulations to Afghanistan... this victory belongs to us all," Taliban spokesman Zabihullah Mujahid told reporters hours later from the runway of the airport.
Mujahid said the Taliban's victory was a "lesson for other invaders".
However the Taliban have repeatedly promised a more tolerant and open brand of rule compared with their first stint in power, and Mujahid continued that theme.
Aug 31, 2021 08:28 (IST)
US Secretary of State Antony Blinken says Taliban has to earn legitimacy, support
The Taliban has to earn international legitimacy and support, US Secretary of State Antony Blinken has said.
He said the group can do this by meeting its commitments and obligations.
"The Taliban seeks international legitimacy and support. Our message is: any legitimacy and any support will have to be earned," Blinken said in an address to the nation hours after the US concluded its mission to Afghanistan early Tuesday.
"The Taliban can do that by meeting commitments and obligations - on freedom of travel; respecting the basic rights of the Afghan people, including women and minorities; upholding its commitments on counterterrorism; not carrying out reprisal violence against those who choose to stay in Afghanistan; and forming an inclusive government that can meet the needs and reflect the aspirations of the Afghan people," he said.
Blinken said the US engaged with the Taliban during the past few weeks for evacuation operations.
Aug 31, 2021 07:02 (IST)

Taliban Legitimacy, Support Will Need To Be Earned, Says US
The United States expects the Taliban to live up to their commitments now that US troops have pulled out of Afghanistan, but any legitimacy or support will need to be "earned," US Secretary of State Antony Blinken said Monday. Read Here
Aug 31, 2021 06:39 (IST)

US Military Disabled Scores Of Aircraft, Armored Vehicles Before Leaving Kabul Airport
The US military disabled scores of aircraft and armored vehicles as well as a high-tech rocket defense system at the Kabul airport before it left Monday, a US general said. Read Here
Aug 31, 2021 06:21 (IST)

Will Address Nation On Tuesday Over Final US Exit From Afghanistan: Joe Biden
President Joe Biden announced he will address the nation Tuesday on the final US exit from Afghanistan after 20 years of war against the Taliban. Read Here

46 Dead, Dozens Injured After Fire Breaks Out In Taiwan Building