In the video, Mahmood Ali's grandson Furqan Ahmed is seen seated, along with one other person, on the police van, the number plate of which suggests it is registered in the name of the state police chief. 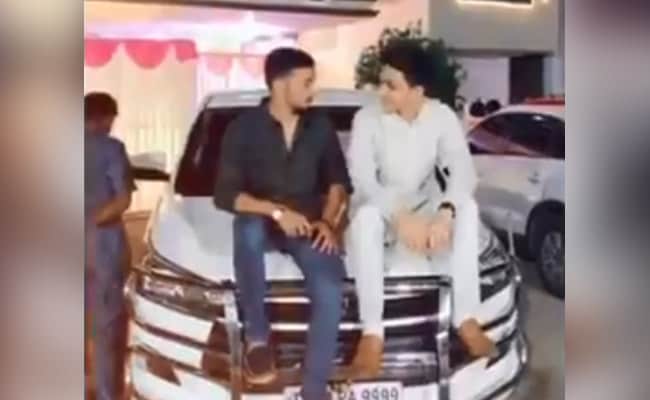 Telangana Home Minister's grandson has sparked a major controversy after a video purportedly showing him sitting on the bonnet of a police car went viral. The video has been criticised on social media as gross misuse of government machinery.

In the video, Mahmood Ali's grandson Furqan Ahmed is seen seated, along with another person, on the police van; the number plate suggests it is registered in the name of the state police chief.

All police vehicles are registered under the name of the Director General of Police and the vehicle in the video was allotted to the Home Minister, police sources told news agency PTI.

In the video, the person sitting with Furqan Ahmed walks up to the camera and lip-syncs a dialogue from a film where a senior police officer is apparently being threatened. The officer is warned that if he did not behave himself with the man seated on the jeep, his throat would be slit.

This #TikTok video shows grandson of #Telangana Home Minister #MahmoodAli seated on police vehicle (regd @TelanganaDGP?); his friend mimes to audio of a police officer being threatened that his throat will be slit if he is not respectful to the man on jeep; Creative licence?@ndtvpic.twitter.com/ym6RHrVSJ3

This is the second time in the past week that a TikTok video has stirred a controversy in the state.

The home minister, to whom the state's police reports, reacted to the video saying his grandson "was just seated on the vehicle". The minister said they had gone to a function two days ago in Hyderabad's Yakatpura where a local made the video. "Some local guy made the video... we will look into it," the minister told PTI.

Two days ago, about 11 employees of Telangana's Khammam Municipal Corporation were transferred, with a pay cut after a TikTok video made by them went viral. They were reportedly contract employees.

In the video, the were seen lip-syncing to a Telugu number. Though the video looked light-hearted and fun, the district collector was not amused.