Ms Thimmakka told the Chief Minister that she would grow more plants in the state and her quest for environmental protection inspired those present at the conference. 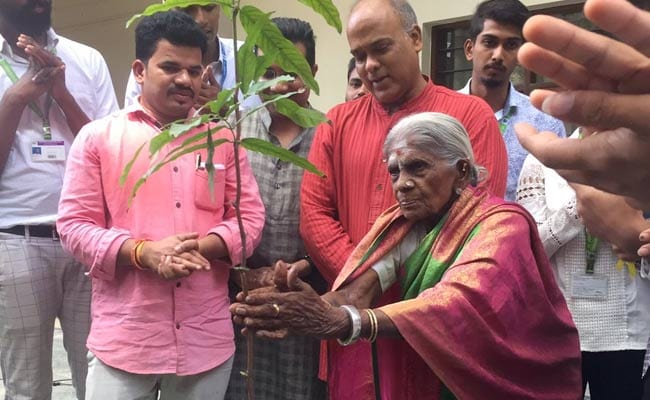 Thimmakka today paid a courtesy visit to Mr Rao at Pragati Bhavan here. On this occasion, the Chief Minister himself introduced Padma Shri awardee Saalumarada Thimmakka to the ministers and public representatives present at the meeting. In the presence of all of them, Rao honoured her and handed over a memento.

"Chief Minister Rao is working very hard for the development of Telangana state," said Ms Thimmakka. She expressed happiness over the current situation of Telangana in the spheres of agriculture, forestry etc under the leadership of Mr Rao.

Ms Thimmakka told the Chief Minister that she would grow more plants in the state and her quest for environmental protection inspired those present at the conference.

In a tweet today, Santosh Kumar J wrote, "#GreenIndiaChallenge is delighted to have #Padmashree #SaalumaradaThimmakka garu and happy to plant a sapling along with her today. My pleasure that she has announced an award from Thimmakka Green Foundation to be presented on her 111th birthday on 28th June. #Blessed."

"Honoured to meet #PadmaShree Smt. #SaalumaradaThimmakka, garu a noted environmentalist, at Pragathi Bhavan along with our CM Sri #KCR garu, Creator of Telangana's Green Movement, Haritha Haram. Such a humble personality and am glad that she liked my work through #GIC," the tweet further read.