According to the officials, the local revenue officer allegedly demanded a bribe of Rs 2 crore to settle a dispute over 28 acres of land in his jurisdiction

Anti-corruption bureau officials in Telangana have seized cash worth over Rs 1.1 crore from the residence of a local revenue officer in the state's Medchal-Malkajgiri district.

Mandal official Erva Balaraju Nagaraju, in-charge of the district's Keesara region, was reportedly caught accepting a bribe at his rented residence in the town's AS Rao Nagar.

Three others, including a village officer and two real estate agents, were also arrested. Further searches of his residence and the office of a tehsildar are ongoing.

In shocking visuals, a handful of ACB (anti-corruption bureau) officials, some of whom are wearing face masks because of rules in place during the Covid pandemic, are seen seated around a table sorting through multiple bundles of bank notes with the help of currency counters.

Each bundle appears to contain hundreds of Rs 100 or Rs 500 notes.

There are at least five bundles visible in one of the photographs, with a blue duffel bag seen filled with more such bundles. In a video, presumably taken after the counting, a large table covered with mountains of cash can be seen. 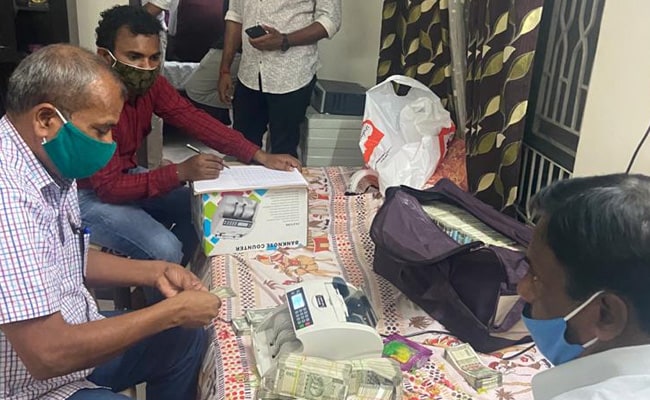 More than Rs 1.1 crore was recovered, in cash, from the house of a Telangana district official

According to the officials, Mr Nagaraju allegedly demanded a bribe of Rs 2 crore to settle a dispute over 28 acres of land in his jurisdiction.

Sources said that apart from the Rs 1.1 crore, a further Rs 28 lakh in cash and gold was also found at his home. Land documents were also recovered.