Nearly 50,000 employees and workers of the road transport corporation had been on strike since Friday midnight, demanding merger of the RTC with the government.

KCR has ruled out merger of RTC with the government as was done in Andhra Pradesh. (File photo)

The striking workers had refused to end their two-day protest by the government's deadline of 6 pm on Saturday.

Mr Rao a.k.a KCR, ruled out any negotiation with the sacked employees.  "It is an unpardonable crime that they went on a strike during the festive season and at a time when the TSRTC was incurring a huge loss of Rs 1,200 crore and its debt burden had gone up to Rs 5,000 crore," he said.

Nearly 50,000 employees and workers of the road transport corporation had been on strike since Friday midnight, with a list of 26 demands including the merger of the corporation with the government so that they become government employees and are entitled to benefits that accrue to them. Many state buses stayed off the roads, affecting thousands in the festival season. 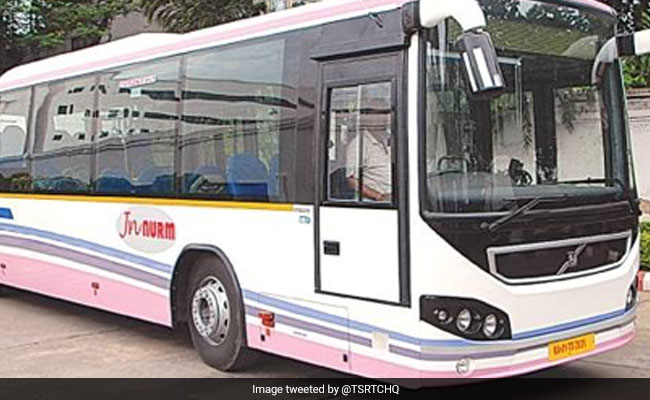 The state government has hired 2,500 buses for the festive season rush.

The state government has hired 2,500 buses for the festival rush. Some 4,114 buses will be given state carriage permission and brought under the RTC. The situation is likely to stabilise in 15 days, it said.

The Vacation Bench of the Telangana High Court has set October 10 as the deadline for the government to explain its alternative arrangements that have been made to ensure that passengers do not face problems due to the strike.

"Private drivers have been hired to run RTC buses. No tickets are being issued as Depot managers and supervisors are also on strike. Private conductors are charging exhorbitant amount and there is no accountability," said Lakshman, a Bank employee, waiting at a bus stand in Hyderabad.

The chief minister has ruled out the merger of the RTC with the government as was done in Andhra Pradesh. "The government will not succumb to any indiscipline and blackmailing tactics of the employees' unions," he said.

"Now, the RTC is left with 1,200 employees. We shall soon start the recruitment process for making fresh appointments. But the new recruits will have to give an undertaking that they would not join any unions," he said.

The BJP has backed the dismissed employees, saying the chief minister's "thoughtless and provocative decision" has left them on the streets on a festival day.

"This is the reward KCR wants to give to the employees in the state for having fought alongside for Telangana formation. Chief Minister KCR has not even met the RTC JAC (Joint Action Committee leaders who called the strike) leaders even once, before taking such brazen decisions. Instead of trying to resolve the issues and demands of the RTC employees across table, KCR has acted irresponsibly. BJP warns KCR of serious consequences, if he doesn't withdraw his thoughtless and illegal decision to dismiss striking RTC employees en masse," the BJP said in a press statement.