Rahul Gandhi said if Congress comes to power in Telangana, whatever GST being paid by the weavers on handloom products will be reimbursed 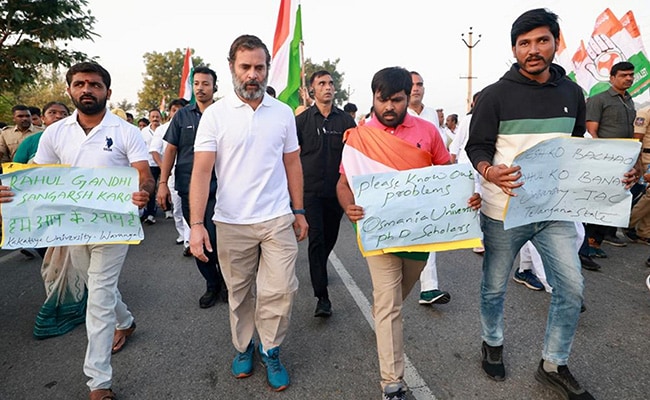 India has the rare distinction of having the highest number of unemployed people and also world's richest persons, Congress leader Rahul Gandhi said on Saturday.

Addressing a gathering in Mahabubnagar District as part of his 'Bharat Jodo Yatra' at Jadcherla, Gandhi said if Congress comes to power in Telangana, whatever GST being paid by the weavers on handloom products will be reimbursed.

"Today in India there are the highest number of unemployed people compared to the last 35 years. Also India has the world's richest people. Whatever they (rich people) want they can do. Here the chief minister (K Chandrasekhar Rao) and there (Prime Minister Narendra Modi) Modi fully support them. These are not political parties but businesses," Gandhi said.

He said he met a mechanical engineering student during his march who now became a delivery boy as the Telangana government allegedly did not reimburse his college fee.

Slamming BJP at the Centre and TRS in the State, he alleged that whatever anti-people policies being implemented by the Modi government, KCR supports them.

He said farmers in the country are unable to get appropriate returns despite their efforts.

Alleging that BJP is spreading hatred and violence in the country, Gandhi said his march is going on like a river without any hate against anyone.

"This is the true India. This is our history. Whatever BJP and RSS are doing is against the country," he said.

The Congress leader said if the Congress forms government in Telangana there will be more budget allocations for education and health.

Telangana Minister Barred From Campaigning In Key Bypoll For 48 Hours