Telangana Jana Samiti is part of the opposition alliance led by the Congress for the coming assembly polls on December 7. 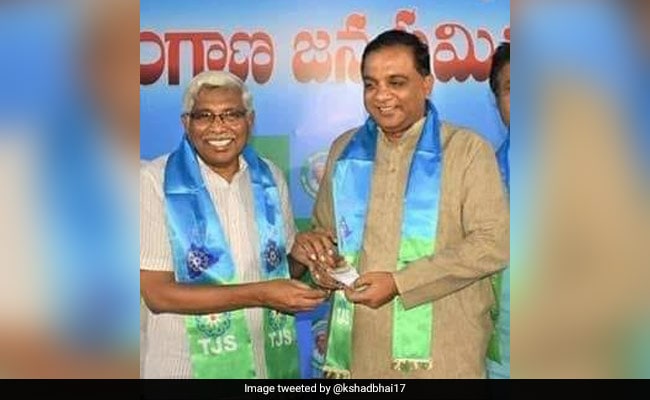 Former judge K Ravinder Reddy, who quit after delivering the verdict in the Mecca Masjid blast case, has joined the Telangana Jana Samiti (TJS), part of the opposition alliance led by the Congress for the coming assembly polls, weeks after expressing keenness to embrace the BJP.

The move is being seen as a shot in the arm for the TJS in the run-up to the December 7 polls. Mr Reddy was welcomed into the party by TJS president M Kodandaram at an event yesterday.

Mr Reddy, the then judge for National Investigation Agency (NIA) cases in Hyderabad, had on April 16 acquitted Hindutva preacher Aseemanand and four others in the Mecca Masjid blast case.

He had resigned as a judge within hours of pronouncing the judgment, citing personal reasons.

Last month, Mr Reddy had expressed keenness to join the Bharatiya Janata Party (BJP), describing it as a "patriotic party", and banners welcoming him into the party were put up at the state BJP headquarters here, but it did not materialise.

The TJS is part of the opposition alliance, also comprising the Congress, the Telugu Desam Party (TDP), the Communist Party of India (CPI), formed to take on the ruling Telangana Rashtra Samithi (TRS) in the upcoming polls.

Mr Kodandaram expressed hope that the seat-sharing talks among the alliance partners would be finalised by "Vijaya Dasami" (October 18).

Mr Kodandaram was the chairman of the Telangana Joint Action Committee (JAC), which was at the forefront of the separate Telangana agitation.

The JAC consisted of various parties, including the TRS. Mr Kodandaram, however, fell out with the TRS after the party assumed power in Telangana in 2014.

Families Of Two Patients, Who Died Of COVID-19, Protest In Telangana