KCR, whose hard-line stance has been heavily criticised by the BJP and the Congress (both in the opposition in the state), told reporters on Friday that the alleged suicides of at least three employees were "not my responsibility".

Diwali, the holiday celebrated around the world as the "festival of lights", turned dark for the families of more than 48,000 employees of Telangana's road transport corporation, who have been without a job, or pay, for six weeks now. Sacked by Chief Minister K Chandrashekar Rao, or KCR, after going on strike 23 days ago over a list of demands that included the merger of the corporation with the government, the employees were unpaid ahead of Dussehra as well.

"We have not bought crackers or new dress... I don't think we will buy. KCR has not given salary. Even in school they did not let me write my exam because we did not pay fees," Neha, whose parents are bus conductors, told NDTV.

"We are not even thinking of the festival. Dussehra was also like this and now Diwali. Children are sad... they want to celebrate but there is no money. They should give our salary soon," Sowbhagyalakshmi, Neha's mother, said.

"I was looking forward to burst crackers but it is not happening as KCR has not given salary," Vaishnavi, the daughter of a bus conductor, said.

At least three employees of the Telangana State Road Transport Corporation (TSRTC) have allegedly committed suicide since the strike began early this month; the third death - that of 53-year-old Venkateshwarlu, a bus driver - took place in Nalgonda district on Saturday.\ 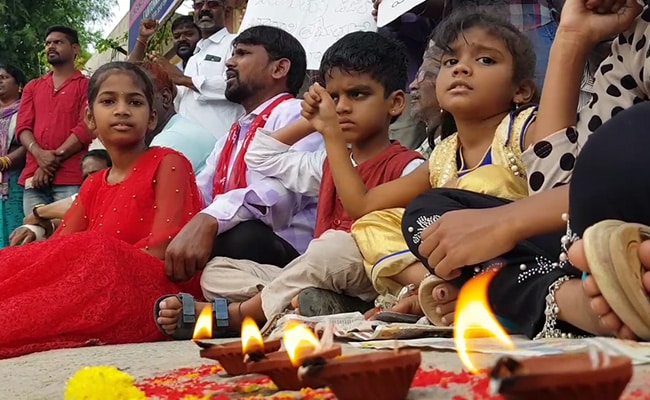 Families of the sacked employees have joined the strike

KCR, whose hardline stance has been heavily criticised by the BJP and the Congress (both in the opposition in the state), told reporters on Friday that the deaths were "not my responsibility".

Earlier this month, after announcing the employees had been sacked, the Chief Minister said they had "self-dismissed" themselves and had committed an "unpardonable crime" by refusing to work at a time when the transport department had incurred a loss of Rs 1,200 crore.

Interestingly, the TSRTC, which has not paid salaries of the sacked workers since September, has run into even bigger losses than before.

Last week the government formed a six-member panel to study the employees' demands. However, on Saturday a top TSRTC official said talks had broken down.

"We are not celebrating Diwali. They called us for talks yesterday but they did not do right. Out of our 26 demands, they said they will only talk on 16," Nagesh, whose wife Vijayalakshmi has experienced health problems since the strike began, said.