In his petition, Vaiko said the Special Court for Trial of MPs and MLAs had erred in its interpretation of 124 A (sedition) of the Indian Penal Code (IPC) with regard to the words he had spoken in support of the banned LTTE. 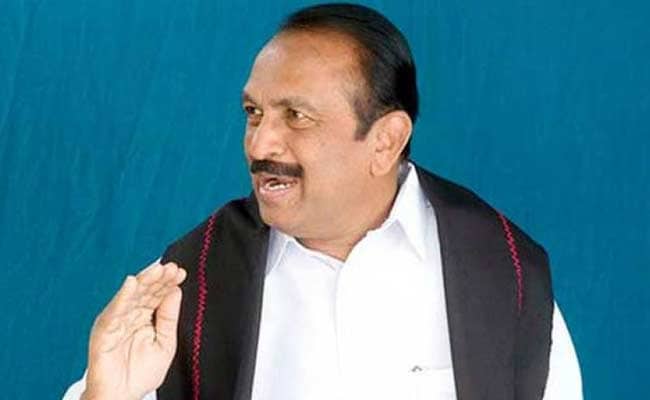 Vaiko submitted that the trial court erroneously rested its conclusion based on inadmissible evidence.

MDMK chief Vaiko has moved the Madras High Court, seeking to quash the order of a lower court, which convicted him of sedition in a 2009 case and sentenced him to undergo simple imprisonment for a year.

In his petition, Vaiko said the Special Court for Trial of MPs and MLAs had erred in its interpretation of 124 A (sedition) of the Indian Penal Code (IPC) with regard to the words he had spoken in support of the banned LTTE.

What he had spoken "must be judged objectively and from standards reasonable to strong minded, firm and courageous men and not those of weak and vacillating minds," he said.

Vaiko, a Rajya Sabha member, submitted that the trial court erroneously rested its conclusion based on inadmissible evidence. He referred to the order of the lower court and said the proof of guilt of the accused is very much on the prosecution.

The MDMK leader submitted that as per Article 20(3) of the Constitution, no person accused of any offence shall be compelled to be a witness against himself.

Vaiko further said the charge sheet filed before the lower court had many sentences that he had levelled accusations against India.

The petitioner said the expression of sympathy to Eelam Tamils cannot be said to be an act of bringing hatred or disaffection towards the government established by law and that the charge under Section 124 A of IPC does not contain anything that he had done anything against the government.

Vaiko alleged that the entire prosecution was vitiated and no conviction could be based on the charge and sought to set aside the judgement of the lower court.

On July 5, Vaiko was convicted by the court and sentenced to undergo simple imprisonment for a year.

Judge J Shanthi held held him guilty of sedition since his "hatred" speech came under the scope of creating disaffection against the government, which is covered in Section 124 A.

Vaiko's counsel, quoting provisions, including the Representation of People Act, had said there was no legal impediment to his client contesting the Rajya Sabha polls.

Following a plea, the sentence was subsequently stayed for a month for enabling filing an appeal against the order.

On July 11, Vaiko and six others were elected unopposed in the biennial elections to Rajya Sabha from Tamil Nadu.

The prosecution case was that Vaiko's speech on July 15, 2009, while releasing the Tamil version (Kutram Saaturgiren) of his English book "I accuse" on the Sri Lankan issue, was against the Indian government, attracting the offence of sedition.