Senior AIADMK leader and Fisheries Minister D Jayakumar took part in a ''yagna'' at a Shiva temple and planted saplings in the premises of the shrine. 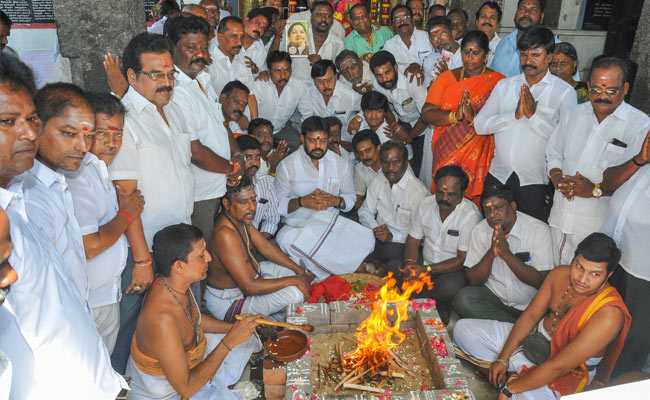 As Tamil Nadu suffers a water crisis, the ruling AIADMK Saturday performed ''yagna'' in temples across the state, while the Opposition DMK staged "empty pot" demonstrations, urging the government to take steps to address the issue.

Senior AIADMK leader and Fisheries Minister D Jayakumar took part in a ''yagna'' at a Shiva temple and planted saplings in the premises of the shrine.

He told reporters that performing yagnas was "an expression of faith", hoping that prayers for rain will be answered.

DMK leader and former city mayor Ma Subramanian, who led an agitation, hit out at the AIADMK, saying executing plans with rationale alone could help address the situation.

"Conducting such rituals have no utility," he told PTI.

As Mr Velumani took part in prayers, hundreds of DMK cadres staged a protest, seeking the minister's resignation for his "failure" to create necessary infrastructure for water supply.

Talking to reporters later, he said the move to bring water from Jolarpet in Vellore district to Chennai would not affect the water availability there.

"Even as they tasked us to hold pujas, rains have started in Chennai and Madurai too will get showers," Mr Raju said, adding divine power has helped.

The DMK had on Wednesday said it would hold protests across the southern state on Saturday to urge the AIADMK government to take steps on a war footing to address the acute water crisis.

The main opposition also slammed the state government on the water issue for what it called "negligence" and "administrative failure."

The DMK, meanwhile, announced Saturday that its chief M K Stalin would lead a protest demonstration here on June 24.