Inaugurating the programme, Chief Minister Stalin said the scheme would bring beneficial change in the lives of the poor people and billed the initiative as one that would earn a place in history. 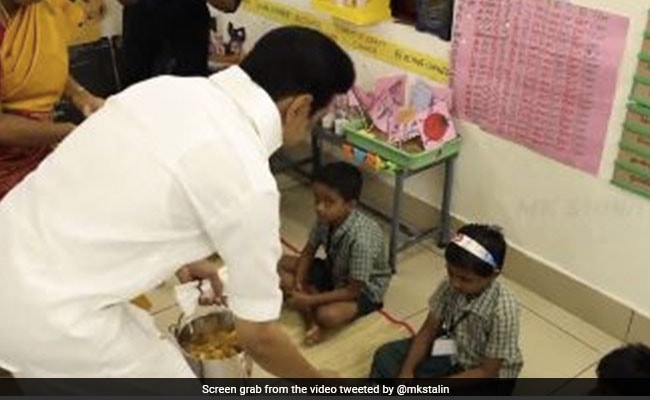 The breakfast scheme for government school students from classes 1 to 5 was launched in Madurai on Thursday by Tamil Nadu Chief Minister M K Stalin and he served and had food with the children.

Inaugurating the programme, Mr Stalin said the scheme would bring beneficial change in the lives of the poor people and billed the initiative as one that would earn a place in history.

Citing similar initiatives in the US and Europe, he said several studies have concluded that d such breakfast programmes led to improved learning skills and school attendance.

The vision of iconic leaders, Periyar E V Ramasamy, C N Annadurai and M Karunanidhi was that nothing -be it poverty or caste- should be an obstacle to accessing education, he said.

Following in the footsteps of such leaders, Mr Stalin said he experienced boundless joy when he is fulfilling their dreams.

In early 1900, when the Colonel Olcott School took shape in Chennai, it was social reformer Pandithar Iyothee Thassar who sowed the seeds for providing lunch to school children.

A first, the noon meal scheme was launched in 1922 in a Chennai Corporation school by Mayor Pitti Theagarayar, a stalwart of the Justice Party, which was the precursor to the Dravidian movement, Mr Stalin said.

Months ahead of independence, the British regime had put the noon meal scheme on hold, citing financial constraints.

In 1955, former Chief Minister K Kamaraj inaugurated the noon meal scheme, Mr Stalin said and traced the evolution of the lunch scheme in Tamil Nadu from then onwards.

During an inspection of government schools in Chennai, Mr Stalin said he learnt that many children came to schools without having their breakfast.

Considering such a scenario, he said students should not be taught when they were hungry and that is the reason for launching the breakfast scheme.

"The expenditure is Rs 12.75 per child per day and I am using the word spending in the administrative sense. Truly, this is not expenditure. This is our government's duty and my duty. I assure you that all steps will be taken for phased extension of the scheme and its comprehensive implementation." Such programmes are neither "freebies" nor concessions, this is the duty and responsibility of the government, he said.

The key objectives of the scheme provided free of cost to children,  prevention of hunger and nutritional deficiency, and ensure enhancement of nutrients besides easing the burden of working women.

The scheme, which has an allocation of Rs 33.56 crore, will be implemented in a total of 1,545 schools benefitting 1,14,095 students across the state. This is the first phase.

The chief minister launched the scheme at the Aadhimoolam Corporation Primary School in Madurai by serving breakfast to children and he sat with them on the floor and had food along with them.

Mr Stalin inspected the central kitchen at Nelpettai here and flagged off vehicles carrying food to various schools. He released a souvenir tracing the food programmes implemented in government-run schools in Tamil Nadu for about a century and social activist Kamalathal received the first copy.

Supervisory committees will monitor the implementation of the schemes at the levels of state, district and school comprising officials of various government departments.

On 7 May 2022, on the occasion of the completion of a year in office, Stalin announced the scheme in Tamil Nadu Assembly. In Tamil, the scheme is named "Mudalamaicharin Kalai Unavu Thittam (Chief Minister's Breakfast Scheme)."