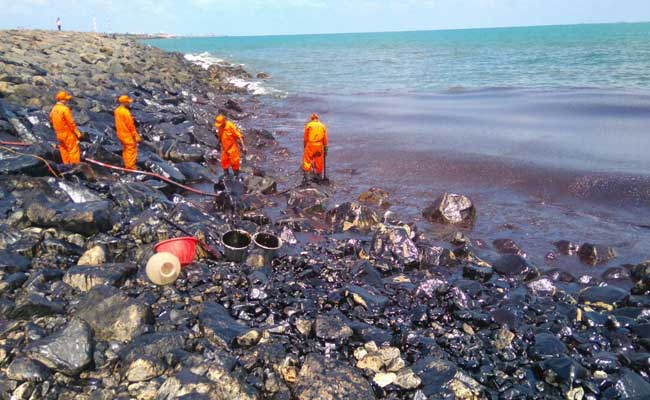 Over 1,000 people from various agencies are involved in the clean-up operation.

Chennai: As several government agencies are engaged in cleaning up the shoreline following the oil spill after two ships collided near the Kamarajar Port recently, the Coast Guard today said nearly 40 tonnes of oil sludge and 27 tonnes of oil mixed with water were collected so far. As many as 1,025 personnel from various departments were involved in the clean-up of the shoreline, Coast Guard said in a release.

"As on date, approximately 40 tonnes of oil sludge and 27 tonnes of oil and water mixture were collected and was being dispatched to Kamaraj Port Trust," the release said.

Meanwhile, Fisheries Minister D Jayakumar and senior government officials inspected the area after reports emerged that people feared to buy seafood as several fish were dead due to the incident.

Responding to a query, Mr Jayakumar said, "It is not true. People need not fear to consume fish.

"It is our duty to allay such fears. Therefore, we took some samples of the dead fish taken from Ennore, Marina, Thiruvanmiyur areas. There were reports of oil slick. The results from laboratory have clarified that it is safe to consume," he told reporters.

Coast Guard helicopters which were carrying out regular sorties for continuous monitoring of the oil slick identified "stagnated thick oil slick about 100 metres wide near Ennore and 500 x 500 metres near Kasimedu harbour".

Coast Guard ship Varada along with a helicopter integrated with pollution control equipment has sailed to clear the oil slick.

Promoted
Listen to the latest songs, only on JioSaavn.com
Volunteers from various engineering colleges, fishermen communities have also joined the cleaning operations.

The incident took place on January 28 when 'M T BW Maple', with a flag of 'Isle of Man', was leaving after emptying Liquefied Petroleum Gas and M T Dawn, Kanchipuram, loaded with petroleum oil lubricant, was on its way to berth at the Ennore port.