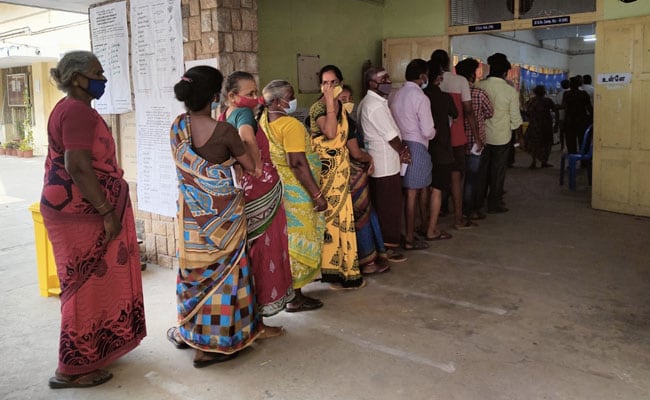 Twenty-one cities including Chennai will elect more than 12,000 members.

The urban local body polls are being held today in Tamil Nadu after a gap of over 10 years. Twenty-one cities including Chennai, 138 municipalities and 490 town panchayats will elect more than 12,000 members. Over the last five years these bodies did not have elected representatives as elections were not held.

He has reiterated his government would soon announce the Rs 1,000 monthly cash pay out for women, his party, the DMK promised before assembly polls.

"I tell you, soon this Stalin would fulfill the promise of monthly Rs 1,000 for women heads of families. Don't worry or doubt. This Stalin will definitely fulfill if he says anything," Mr Stalin, who campaigned only virtually, said in one of his last addresses.

Although its a local body poll that should focus on local civic issues,
this time, however, the ruling DMK has taken up national issues on federalism and state autonomy.

MK Stalin has even launched a federation for social justice in a bid to bring together several non-BJP parties across India and to elevate himself to the national arena.

The opposition AIADMK hopes to revive its political fortunes after three consecutive poll defeats. It's targeting the government for not fulfilling the monthly, Rs 1,000 allowance for women heads of families.

The BJP which gained a foothold in the state winning four seats in the assembly polls is fighting alone, snapping ties with the AIADMK hoping to expand its footprint in the state.

"Our cadre would get only stronger. Ours is the only big party that fights alone," said BJP Spokesperson Narayan Thirupathy.

Actor Kamal Haasan's MNM isn't giving up after drawing a blank in Lok Sabha and state polls. It promises honest and good governance,  for vote for a change.

Campaigning in Madurai, Kamal Haasan said, "They have left this place for 18 years even without clearing garbage. We would clear even garbage. I say we, including me."

The Dravidian arch-rivals hardly focussed on local civic amenities in their campaign. For Chief Minister M K Stalin who had to handle the second and third covid wave and severe flooding in Chennai after taking over, many say these election results would be seen as a report card on his performance.