The yatra, which entered Tamil Nadu yesterday, reached this holy island this evening after traversing through Tirunelveli, Tuticorin and Madurai districts. 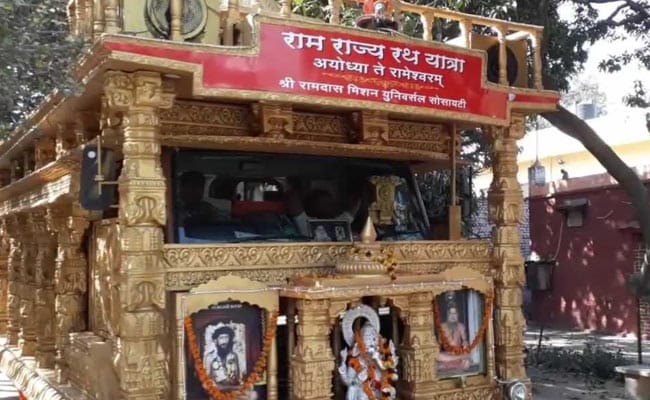 The yatra, which entered Tamil Nadu yesterday, reached this holy island this evening after traversing through Tirunelveli, Tuticorin and Madurai districts.

Activists of VHP and some other Hindu outfits, including Hindu Makkal katchi, accompanied the rath yatra being organised by Sri Ramadasa Mission Universal Society.

A strong posse of Police personnel escorted the yatra in view of attempts by some pro-Tamil and Muslim outfits attempt to block it in Tirunelveli district yesterday when it entered the state.

Main opposition DMK has also protested against the yatra with the opponents claiming it would disturb communal harmony in the state.

Chief Minister K Palaniswami has defended the decision to grant permission to the yatra, saying all religions have equal rights and accused the opposition of trying to give political colour.

After the rath went around the famous Lord Ramanathaswamy temple here, a public meeting which was attended by a large number of people.

Leaders of VHP and other Hindu outfits along with the organisers addressed the gathering.

Krishnananda Saraswathi of the society said the yatra passed through four states without any problem.

Stating that only in Tamil Nadu it encountered opposition, he said there was no need for protest.

He and senior Vishwa Hindu Parishad leader S Vendantam said a temple for Lord Ram would be built in Ayodhya.

After overnight stay, the yatra would proceed to Kanyakumari district before reaching Thiruvananthapuram in Kerala.

Earlier, the yatra arrived in Ramanathapuram district, in which Rameswaram is located, from Madurai and hundreds of people gathered along the road welcoming it, police said.

In Madurai, senior BJP leader H Raja flagged off the yatra, criticising the DMK and other parties for "instigating" people against the rath.

He claimed these parties would lose their people's support for opposing the yatra which had attracted "good crowd".

Even Mahathma Gandhi wanted to establish "Ram Rajya" in the country, he said.

He appreciated the state police and the AIADMK government for providing security to the yatra.

(This story has not been edited by NDTV staff and is auto-generated from a syndicated feed.)
Comments
Ram Rajya Rath YatraRam temple at AyodhyaVHP leader on Ram Temple