Rajinikanth said he was not in favour of Tamil Nadu Chief Minister K Palaniswami's resignation over the deaths in police firing during anti-sterlite protests in Tuticorin. 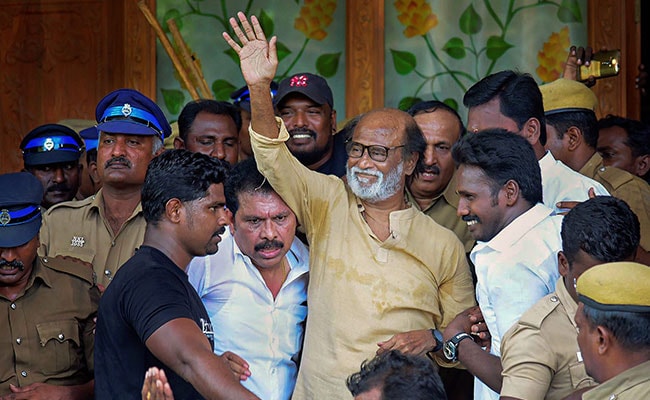 Rajinikanth called for action against those who attacked policemen during the May 22 protest. (File)

Tuticorin: Superstar Rajinikanth today blamed anti-social elements for the anti-Sterlite protests in Tuticorin last week that resulted in 13 deaths in police firing, and called for a Jayalalithaa-style 'iron fist' policy to crush such people in the interest of Tamil Nadu.

Speaking to reporters after meeting those injured in the police firing, he did not favour K Palaniswami's resignation as chief minister over the issue.

"The attack on the collector's office and setting on fire (Sterlite) quarters was not done by the common people. Some anti-social elements infiltrated... (the protesting locals). It is their handiwork," he said and expressed grief that 'this noble protest' had ended on a bloody note.

The actor, who gave away Rs 10,000 relief to each of the 48 injured persons, said pro-Jallikattu protests in Tamil Nadu last year also saw infiltration of 'anti-social elements'.

He had earlier announced a relief of Rs two lakh each to the families of the 13 deceased.

"The government should crush such anti-social elements with an iron fist. On that front I laud Jayalalithaa as she kept such persons under check with an iron fist. They should follow her policy and keep them under check, as otherwise it will result in great danger for Tamil Nadu," he said.

He also called for action against those who attacked policemen during the May 22 protest.

Thirteen people were killed in police firing on May 22-23 when violence broke out at the protest by locals, demanding closure of Sterlite Industries in this district over pollution issues.

On the opposition's demand for resignation of the chief minister, Mr Rajinikanth sought to know how quitting could be a solution.

"If you demand resignation for everything, what (is the purpose)... I don't want to talk about that," he said.

To a question, he said he had "no confidence" in the state government appointed one-man inquiry commission to probe the violence, under retired Madras High Court judge Aruna Jegadeesan.

The actor, who has announced plans to join politics, said constant agitations may not yield solutions and added that one should move courts for redressal of their grievances.

Agitations often happen in the state, sometimes for "genuine reasons," he said, adding that people should be careful against being incited.

Too many protests could dissuade trade and investors from coming to Tamil Nadu, affecting employment opportunities, he said, adding agriculture has already been hit due to water scarcity.

The actor cautioned Vedanta Ltd, which runs Sterlite Industries, against moving court over the Tamil Nadu government's closure order of the copper smelter unit, saying "they are not humans if they do so."

"With so many deaths and injuries, they should not even think of doing that," he said, adding, nothing can stand before people's power.

Mr Rajinikanth faulted the police intelligence for its 'big mistake' in failing to detect the presence of anti-social elements in the protests.

At the hospital, the actor spoke to the injured and was seen holding hands of some of them.

Earlier, speaking to reporters in Chennai ahead of his visit to Tuticorin, Mr Rajinikanth hoped that those injured would have "some joy" in meeting him as he was a cinema star.

He expressed regret that his visit to Tuticorin had come at a very "difficult time" and added that going there was his 'goodwill gesture.'

Promoted
Listen to the latest songs, only on JioSaavn.com
To a question on the war of words between the AIADMK and the DMK over the May 22 incident, he said there should be no blame game on such matters and the focus should be on moving ahead.

Asked for his comments on Prime Minister Narendra Modi not reacting to the incident so far, he said: "The media is so powerful. Ask him, ok."