This was the AIADMK's first major electoral outing since the death of its powerful and charismatic chief J Jayalalithaa in 2016. 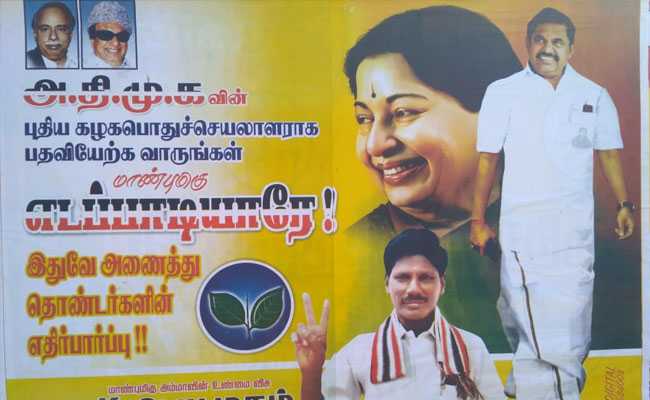 Posters near the AIADMK headquarters seen today ask EPS to take over.

In the simmering feud between Tamil Nadu Chief Minister E Palanisamy and his deputy O Paneerselvam, a.k.a "EPS" and "OPS", posters demanding singular leadership of the ruling AIADMK mark an escalation.

Posters near the AIADMK headquarters seen today ask EPS to take over as the party's boss and become general secretary. The posters emerged as AIADMK lawmakers met to discuss the party's recent poll drubbing and preps for upcoming local body polls.

The AIADMK retained power in the state by winning nine of 22 assembly seats where by-polls were held along with the national election. But in a big worry for the ruling party, the DMK won 13 and crossed the 100-mark in the 234-member Tamil Nadu assembly for the first time in many years.

This was the AIADMK's first major electoral outing since the death of its powerful and charismatic chief J Jayalalithaa in 2016.

OPS, who took over as stand-in Chief Minister after her death, was shafted by Jayalalithaa's closest aide VK Sasikala, after which he rebelled.

Ms Sasikala's attempt to step in as the chief of the party and chief minister of the state - stymied by a court verdict sentencing her to jail for corruption - left the party on the verge of a split and fighting massive infighting until EPS, handpicked by Ms Sasikala to take over as chief minister while she served her jail term, left her faction and patched up with OPS.

OPS settled for the post of Deputy Chief Minister. The two also decided on joint leadership with OPS as coordinator and EPS as co-coordinator, assisted by an advisory committee.

Last week, a few legislators raised a demand for single leadership, which was seen to tacitly suggest that EPS should take charge.

The party asked its leaders to stop speaking to the media.