Azhar Moideen, a final year humanities student, and Justin Joseph, pursuing Phd in the same stream, launched the "hunger strike" holding placards and also demanding internal inquiry, a promise for fair and unbiased investigation and setting up of a grievance redressal committee. 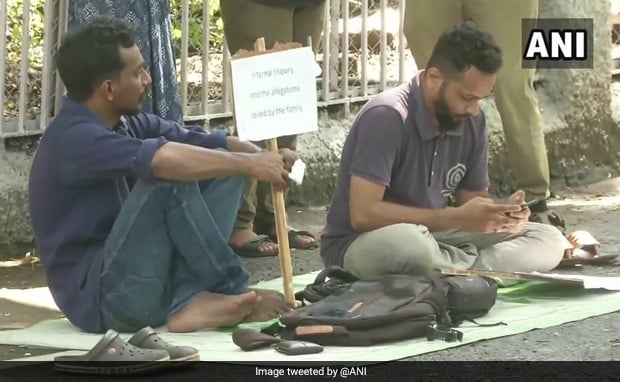 Two students of the Indian Institute of Technology (IIT) Madras on Monday launched an indefinite fast on the campus demanding an internal inquiry into the conduct of faculty as sought by the family of a woman student who committed suicide recently.

Azhar Moideen, a final year humanities student, and Justin Joseph, pursuing Phd in the same stream, launched the "hunger strike" holding placards and also demanding internal inquiry, a promise for fair and unbiased investigation and setting up of a grievance redressal committee.

Asked whether the management has called them for talks, he said, "they have expressed their willingness to meet us...we will meet them once they confirm the time."

The prestigious institute has been rocked by protests after the first year humanities student, committed suicide in its hostel on November 9. Her Kerala-based family has alleged a senior faculty was responsible for her taking the extreme step.

The father of the student had last week called on Chief Minister K Palaniswami and the Tamil Nadu Director General of Police, seeking a fair, expeditious probe.

Political parties, including DMK, too staged protests over the incident and the case, handled by the local police initially, has been transferred to the Central Crime Branch.

IIT Madras has said it is extending full cooperation to the police investigation and appealed to all concerned not to initiate or spread any rumours about the institute and let the inquiry be completed.

Meanwhile, police sources on Monday indicated that questioning in the case was on but declined to elaborate.

The fasting students are also demanding an external survey into the issues faced by the students inside the institute as demanded in a resolution passed unanimously in the Students Council.

"Chinta Bar", a students' body of which the two are members, said they decided to go ahead with the hunger strike since the management was yet to accept all their demands.

"It will be called off if and when the administration issues a statement or sends a smail (a mail transfer platform) to all students saying that all our demands will be met at the earliest," it said in a statement.

The students demanded implementation in full of the Students Legislative Council resolution of the last semester which asked the administration to set up a body of outside experts to study the overall mental wellbeing of the students and on the effectiveness of the existing mechanisms to tackle all issues faced by students.

The experts should include psychologists, educationists and mental health experts and they must look into the pressure faced by students especially those from marginalised sections including SCs/STs and women.

Setting up a Complaints and Grievances Redressal Committee in all departments to hear grievances and appointing counsellors to offer assistance to the friends and branch mates of the student who might be suffering from trauma, are the other demands.

They also wanted an official townhall meeting on mental health involving all the stakeholders including students, student representatives (legislators and executive wing members) and the faculty.