DMK Not To Go Ahead With Resolution Seeking Speaker Dhanapal's Removal

The DMK had on April 30 submitted a motion seeking the speaker's removal as he had sent notices to three AIADMK MLAs for siding with rival leader and AMMK founder TTV Dhinakaran. 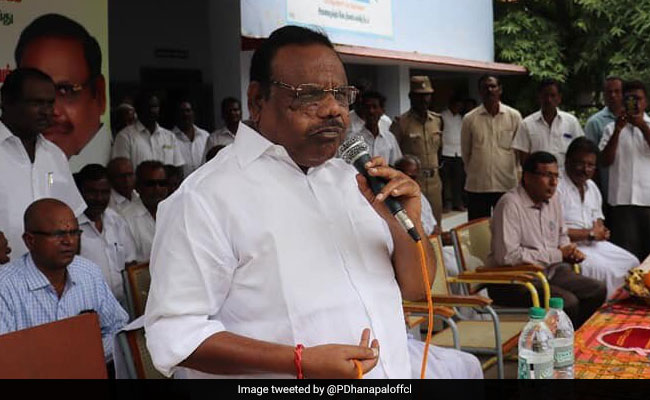 The DMK will not go ahead with a resolution it had moved nearly two months ago seeking the removal of Tamil Nadu Assembly Speaker P Dhanapal from his post, party chief MK Stalin said Friday.

"Today, we have submitted a letter to the Speaker that we will not press the resolution (seeking his removal)," he told reporters at the secretariat.

The DMK had on April 30 submitted a motion seeking the speaker's removal as he had sent notices to three AIADMK MLAs for siding with rival leader and AMMK founder TTV Dhinakaran.

"A stand was taken to seek his (Dhanapal's) removal based on the circumstances at that point of time. The party, however, now feels that the motion was not warranted," Mr Stalin said on the opening day of the Assembly session.

The DMK had submitted the motion against the Speaker when bypolls to 18 Assembly seats had just concluded (on April 18) and by-elections to four more constituencies were scheduled on May 19.

The principal opposition party, which had all along claimed that it would win bypolls to all the 22 Assembly segments and capture power, alleged the notices to the three AIADMK MLAs by the speaker were an attempt to alter majority in the House apparently in favour of the party in power.

Chief Minister K Palaniswami had wondered why the DMK preferred a motion seeking Speaker''s removal if it was confident of winning all the 22 Assembly seats.

The legislators approached the Supreme Court which stayed the move.

In a resolution proposing the Speaker's removal, Mr Stalin had said Mr Dhanapal issuing notices was tantamount to "altering the majority" position in the Assembly.

By winning nine of the 22 Assembly seats in the bypolls, the AIADMK now has a majority in the House notwithstanding the stand of the three MLAs vis-a-vis their support to the government.

The DMK's latest move is seen as an endorsement of the changed political scenario after the Assembly bypolls which has given the AIADMK a clear majority in the House.

The AIADMK has 123 MLAs in the Assembly including the speaker. The DMK has 100 legislators, while its allies the Congress has seven and the IUML one MLA. Amma Makkal Munnetra Kazhagam (AMMK) leader TTV Dhinakaran is an Independent.

There are two vacancies in the House after the passing away of DMK's Vikravandi legislator K Rathamani on June 14 and the resignation of Congress MLA from Nanguneri H Vasanthakumar on May 29 upon his election to the Lok Sabha from Kanyakumari.

The Assembly, which convened Friday, adopted condolence resolutions on the demise of AIADMK's R Kanagaraj and DMK's Rathamani.

Kanagaraj had represented Sulur Assembly segment from 2016 and died on March 21. Bypolls were held to that constituency on May 19 and a new MLA was elected.

Obituary references were made on the death of eight former MLAs as well.