Farmers from Tamil Nadu had travelled to Delhi earlier this year to call on Prime Minister Narendra Modi to provide relief after the rains failed, leaving many of them in debt. 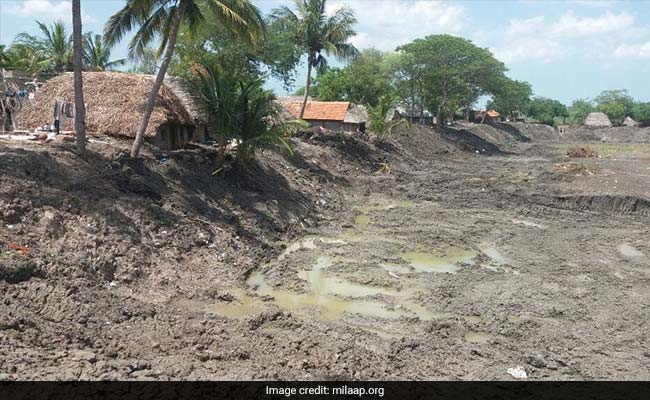 The Thiruvaimur-Thamarai pond in Nagapattinam, in Tamil Nadu, was cleaned and de-silted earlier this year

Nagapattinam, Tamil Nadu: The worst drought in more than a century in Tamil Nadu has led to protests, farmer suicides, and clashes at the water taps as reservoirs and lakes dry up in the searing heat.

It has also led to an unusual crowdfunding campaign that helped restore a village pond in one of the worst affected areas, with a similar effort planned for a second pond.

The Thiruvaimur-Thamarai pond in Nagapattinam, in Tamil Nadu, was cleaned and de-silted earlier this year with half those funds, in preparation for approaching rains. A second pond in the same area will be cleaned shortly.

"We had crowdfunded other social impact projects before, including destitute women and underprivileged children," said Aishwarya Guha, head of impact projects at The Better India.

"When we saw the farmer protests, we wanted to do something to help. After some discussion, we decided restoring ponds would have the most long-term impact, and that we should do this with community involvement through crowdfunding," she said.

Farmers from Tamil Nadu had travelled to Delhi earlier this year to call on Prime Minister Narendra Modi to provide relief after the rains failed, leaving many of them in debt.

They displayed the skulls of fellow farmers believed to have committed suicide, and placed live rats in their mouths to draw the nation's attention to their plight.

Crowdfunding is growing in popularity in the country as a means to finance medical emergencies, help underpriviliged people and assist during disasters. Environmental causes - from planting trees to cleaning beaches - is a relatively new focus area.

The restoration of the pond in Nagapattinam was done by conservation group Environmentalist Foundation of India, which has cleaned lakes and ponds across the country.

"We used to have a very good system of using ponds and tanks for farming, for livestock, and daily needs. There was a lot of traditional knowledge and discipline around the use of water," said Arun Krishnamurthy, EFI's founder.

"But much of that is lost now, as people began to dig borewells and disregard traditional crop patterns, and because of encroachments and dumping of trash," he said.

Restoration of a water body entails removing garbage in and around the lake or pond. The lake bed is then dredged, with the captured silt used to heighten and strengthen the bunds around its edges to increase storage capacity and prevent overflow.

The water is tested for levels of contaminants and pollutants before, during and after the process. A small wetland is created in a corner to help filter out incoming waste.

The community is encouraged to plant native plant species around the pond to prevent erosion and limit evaporation losses.

The Thiruvaimur pond, which measures about five acres (2 hectares), was restored in two months, and the improvement in water storage is expected to benefit about 2,000 families, said Mr Krishnamurthy.

"If they could all be restored to their original purpose and maintained, we probably wouldn't need so many dams, and there would be no water wars between states," he said.

Deadly clashes erupted last year over the diversion of water from the Cauvery river, which has been a source of tension between Tamil Nadu and Karnataka for more than a century.

The Cauvery delta region is known as the "rice bowl" of India for its cultivation of the staple crop.

Farmers were once able to grow three crops a year in its fertile soil. But with rains failing as climate change strengthens, hundreds of lakes and ponds have dried up, and farmers are barely able harvest a single crop of rice.

After the rains failed last year, Tamil Nadu declared drought in all its 32 districts, with Nagapattinam among the worst affected. Water levels in reservoirs fell to a fifth of their capacity, and hundreds of farmers have killed themselves.

Desperate, a state minister attempted to cover a dam in Tamil Nadu with sheets of polystyrene earlier this year to limit water loss from evaporation.

Promoted
Listen to the latest songs, only on JioSaavn.com
The sheets blew away instantly, drawing ridicule on social media and prompting officials to say they would test other methods.