"Mooli" died of old age on Sunday, sparking an outpouring of grief -- including a funeral procession and lavish burial ceremony, complete with fireworks -- in a village in Tamil Nadu. 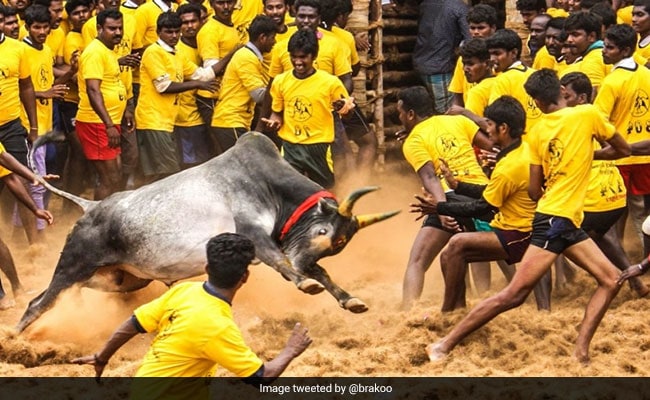 "Mooli" died of old age on Sunday, sparking an outpouring of grief. (Representational)

Some 200 people defied coronavirus lockdown to pay their last respects to a bull adored for his race-winning heroics and revered as a deity in Tamil Nadu, an official said Thursday.

"Mooli" died of old age on Sunday, sparking an outpouring of grief -- including a funeral procession and lavish burial ceremony, complete with fireworks -- in a village in Tamil Nadu.

The state has so far reported 1,242 cases of the virus with 14 deaths, according to official data, and is under lockdown to stem COVID-19's spread.

But some 200 people came to bid the bull -- who villagers claimed was at least 20 years old -- a final goodbye, said P Rajasekaran, president of the local Jallikattu Peravai Association.

"Initially only 30-50 people participated in the burial, and then later to pay their last respects around 100-200 assembled," local official TG Vinay told AFP.

"They didn't assemble at one point but they kept walking in, paying their last respects, praying and then leaving."

Police have registered a complaint against seven villagers for violating a ban on gatherings of more than five people, because of the coronavirus outbreak.

The bull -- also a star at festivals where villagers try to hold the beasts' humps and run -- enjoyed a special status as he was attached to a local temple and revered as a deity, villagers said.

Local media reports said admirers of the animal brought garlands, towels and bundles of cash as gifts for his sendoff.

"Women cried when they heard when the bull died. The villagers were very sad," said resident Kalubambarai, who goes by one name.

He added if a lockdown wasn't in place, the funeral "would be like a huge carnival."

A national lockdown is in place across India until May 3, although some restrictions will be eased after April 20.