At Sarkar Crew Get-Together, Mixer Grinder Is Icing On Top Of Cake

The icing on the cake seems to be the inclusion of topical mixer-grinder, pictures of which were uploaded on Instagram by A R Rahman. 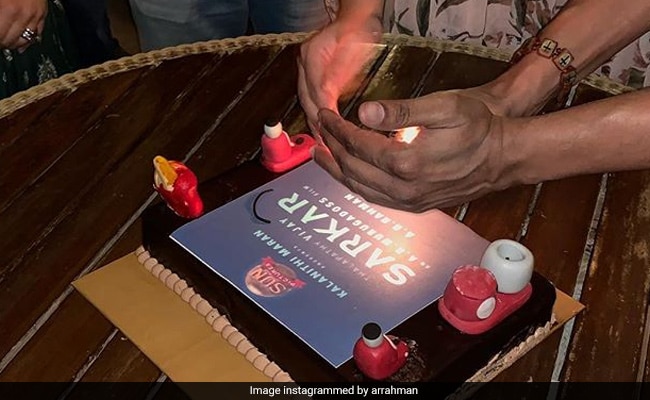 The get-together of the key names in the film including actor Vijay, director A R Murugadoss and Rahman

Days after calling a truce with the ruling AIADMK on the controversy surrounding the latter's freebee schemes, the 'Sarkar' film crew had a little get-together with a cake drawing all the attention.

The icing on the cake, however, seems to be the inclusion of topical mixer-grinder, pictures of which were uploaded on Instagram by Oscar-winning A R Rahman, who has scored the film's music.

The get-together of the key names in the film including actor Vijay, director A R Murugadoss and Mr Rahman, chose to include the contentious mixer and grinder in the cake, with their creamy replicas on either side of the delicacy.

The picture purportedly shows someone trying to light a candle, with the musician captioning the photo: "Whose hand is this ?"

The Sun Pictures venture had courted controversy last week over scenes of mixer-grinder being burnt, seen as an affront to the late J Jayalalithaa, who had launched the scheme in 2011 in lines with her poll promise.

The AIADMK had also taken exception to the name of a woman character, playing the antagonist's role, apparently referring to J Jayalalithaa.

Senior ministers wanted the scene to be deleted and had warned of action over non-compliance, even as Tamil superstars Rajinikanth and Kamal Haasan rallied behind Vijay, wondering how cuts were possible in a film certified by the Central Board of Film Certification (CBFC).

Later, the producers opted for 'voluntary cuts,' besides 'muting' the name, saying they did so in the interest of public safety, as well as on pleas from theatre owners.