Onion price rise: Flanked by their friends, the smiling couple in their bright, crisp wedding clothes takes hold of a packet of onion on their wedding 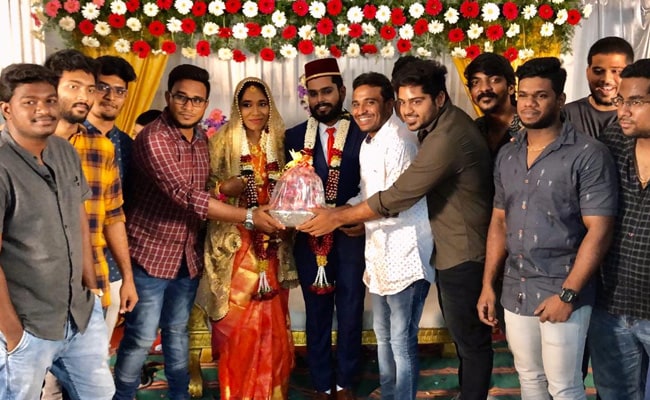 The couple takes a bouquet of onions at their wedding in Cuddalore, Tamil Nadu

A couple in Tamil Nadu's Cuddalore received a 'priceless' gift on their wedding - a bouquet of onions. The price of the kitchen staple has been rising through the roof, touching Rs 180 per kg during the weekend.

Flanked by their friends, the smiling couple in their bright, crisp wedding clothes takes hold of a packet of onion on their wedding. It appears their friends are making a humorous comment on the runaway prices of onion.

The price of onion has dropped by Rs 20 to Rs 160 in parts of Tamil Nadu today. Traders have blamed rising prices of the vegetable on unseasonal rain.

"Since it is the rainy season, we are supposed to get onions from other states. Because it has rained heavily affecting the cultivation of onions, the incoming load has decreased. This has pushed up the prices. This will be alright in the next 15-20 days. In Tamil Nadu, the output of onions is good. In the next 20 days, the prices of onions in Tamil Nadu will fall," Mr Palaniswami told reporters in Coimbatore.

The state government said it is selling onions at Rs 40 a kg at its outlets.

Memes over the rising prices of onion has flooded social media. A controversy also broke out over Finance Minister Nirmala Sitharaman's comment in parliament that she "doesn't eat onions much" and belongs to a family that has little use for the kitchen staple.

"I don't eat a lot of onions and garlic, so don't worry. I come from a family that doesn't have much to do with onions," Nirmala Sitharaman said in parliament last week, responding to opposition taunts during her statement in Lok Sabha on rising onion prices.

Her comment drew criticism from the opposition that alleged she was not being sensitive enough to the issue since the price rise of the kitchen staple affected millions of people.