Clad in a white shirt, dhoti and his trademark yellow shawl, the 93-year old five-time Tamil Nadu chief minister went around the exhibition at the daily's office premises on his wheelchair. 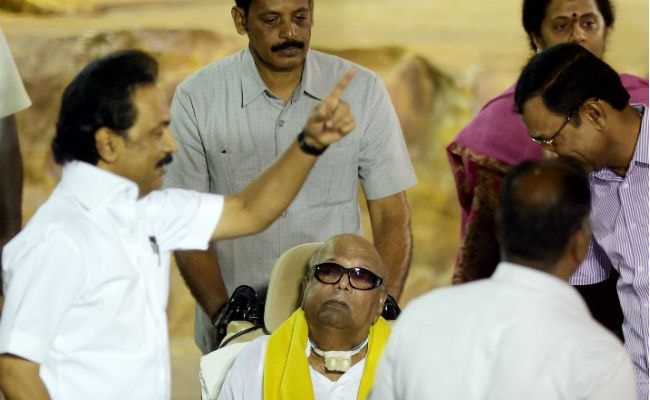 Chennai: After a gap of nearly a year, during which he was hospitalised twice, DMK chief M Karunanidhi yesterday made his first public appearance at an exhibition here, held to showcase the 75-year journey of the party's mouthpiece, 'Murasoli'.

Clad in a white shirt, dhoti and his trademark yellow shawl, the 93-year old five-time Tamil Nadu chief minister went around the exhibition at the daily's office premises on his wheelchair.

Mr Karunanidhi, who is wheelchair-bound since 2010, did not make a public appearance since October, 2016 as he was ill.

He was getting medical treatment at home and did not attend any public event as per doctors' advice to avoid any possibility of infection.

The nonagenarian leader spent about 40 minutes at the expo, during which he took a look at a statue of late Murasoli Maran, his nephew and a former Union minister.

Mr Karunanidhi was accompanied by his son and DMK working president M K Stalin and former state ministers Duraimurugan, E V Velu and Ponmudi, besides his other family members.

The expo catalogues the journey of 'Murasoli', which was founded by Karunanidhi in 1942.

The daily celebrated its 75th year jubilee in a grand fashion in August when top actors Rajinikanth and Kamal Haasan attended the event among others.

Mr Karunanidhi fell ill in October, 2016 due to a drug- induced allergy. In December, he was admitted to the Kauvery Hospital in Chennai twice.

The veteran leader was admitted to the hospital for "optimisation of nutrition and hydration" in the first week of December and later, due to a throat and lung infection.

Promoted
Listen to the latest songs, only on JioSaavn.com
He had undergone tracheostomy, a procedure to optimise breathing.

Congress vice-president Rahul Gandhi had called on the DMK patriarch at his residence in December, 2016.