P V Sindhu, however, failed to break the rhythm of World No 10 Chen to go down fighting 17-21 21-23 in a 43-minute match. This is her second successive early loss as after clinching the Korea Open she had lost in the second round of Japan Open last month. 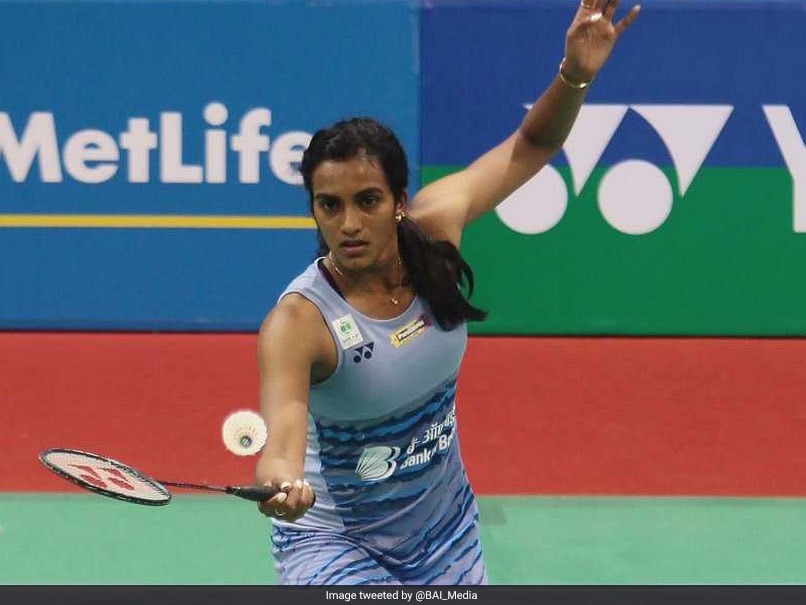 Odense: India had a bitter sweet day at Denmark Open as Saina Nehwal knocked out Olympic champion Carolina Marin of Spain but title-contender P V Sindhu suffered a straight game loss against China's Chen Yufei to crash out of the opening round, here.

Glasgow World Championship bronze medallist, Saina defeated two-time World champion Marin 22-20 21-18 in a hard- fought battle to avenge her Japan Open second round loss to the Spaniard. She will play either Thailand's Nitchaon Jindapol or Russia's Evgeniya Kosetskaya in the next round.

Late in the day, Ms Sindhu, however, failed to break the rhythm of World No 10 Chen to go down fighting 17-21 21-23 in a 43-minute match. This is her second successive early loss as after clinching the Korea Open she had lost in the second round of Japan Open last month.

Earlier, Indian top shuttlers Kidambi Srikanth and H S Prannoy made positive starts but B Sai Praneeth bowed out in the opening round of men's singles competition.

On the adjacent court, Praneeth failed to erase 11-7 and 11-8 deficits to go down 10-21 15-21 to local hope Hans- Kristian Solberg Vittinghus in a lop-sided contest.

World No 15 Prannoy, meanwhile, recovered from a 6-11 deficit in the second game to oust Denmark's Emil Holst 21-18 21-19 in a hard-fought match. It was his third win over the Danish shuttler. The Indian is likely to play former World No 1 Malaysian Lee Chong Wei on Thursday.

Satwik and his mixed doubles partner Ashwini Ponnappa, who had reached the semifinals last week at Dutch Open, lost 19-21 17-21 to local combo of Niclas Nohr and Sara Thygesen.

In men's doubles, Satwik and Chirag Shetty, who had reached the quarters at Korea Open, failed to get across Korean pair of Chung Eui Seok and Kim Dukyoung, losing 21-14 18-21 17-21 in the opening round.

Experienced men's doubles combo of Manu Attri and B Sumeeth Reddy also lost 13-21 18-21 to Denmark's Mads Conrad-Petersen and Mads Pieler Kolding, while it was also curtains for Ashwini and Sikki in women's doubles after they went down fighting 21-15 18-21 21-23 to Malaysian combo of Chow Mei Kuan and Lee Meng Yean.

Another mixed doubles pair of Pranaav Jerry Chopra and N Sikki Reddy, who had reached the semifinals at Japan Open, also crashed out last night in the opening round after losing 17-21 15-21 to Irish combo of Sam Magee and Chloe Magee.

The highlight of the day, however, was the match between Saina and Marin where the world no 12 Indian dished out a controlled game mixed with aggression and caution to outwit the World No 4 Spaniard.

The match started on an aggressive note as both the players were locked in an initial battle before Saina managed to eke out a 11-9 lead at the break with the help of her better net play and disguished strokes. She moved to a 13-11 lead with accurate down the line smashes.

But left-handed Marin kept breathing down her neck and leveled par with two points. Every time Saina grabbed a point, Marin came back with her trademark strokes and also took a crucial 19-18 lead with a net return.

Once again Saina's down the line smash came to her rescue as she drew parity and soon grabbed the game point. Marin again came up with another precise net return to level par at 20-20. However, she hit wide next to hand over an opportunity to the Indian, who sealed it with another superb smash.

After the change of sides, Marin started dictating terms initially moving to a 5-3 lead but a pumped up Saina soon came back to turn the tables at 7-6 when her opponent hit wide and managed to lead 11-8 at the break.

After the interval, Marin narrowed the margin to 10-11 but Saina didn't allow the Spaniard to make a comeback as she jumped to a 16-11 lead. Marin made a last ditch effort to claw back at 18-20 but Saina soon shut the door without much ado.

"I was moving well and finally it is about movements and picking up shots. She is the best player in the world and she is playing extremely well but I was happy with the way I was retrieving my shots," said Saina after notching up her fifth win over Marin in nine meetings.

"I really don't know what I played today, everything happened so fast. The court is little fast, it was not a rally kind of court. The smashes were going well but anything could have happened but I picked up those difficult shots," she added.

In another women's singles match, Sindhu conceded a 3-0 lead early on but she managed to erase the deficit when she drew parity at 9-9 and moved together till 17-17. It was at this moment when Chen stepped up and grabbed four crucial points to earn the bragging rights.

In the second game, Chen once again surged to a 7-3 lead and Sindhu once again clawed back with four straight points but at the break, it was the Chinese who had a slender one-point lead.

Promoted
Listen to the latest songs, only on JioSaavn.com
After the interval, Chen extended the lead to 15-11. Ms Sindhu managed to reduce it to 16-17. However, Ms Sindhu struggled to retrieve some low shots and with one of her net dribbles going to net meant Chen had four match points.

Ms Sindhu then saved off four match points to make it 20-20 but eventually Chen closed out the match at 23-21 to avenge her World Championship loss to the Indian.
Comments
PV SindhuDenmark Open