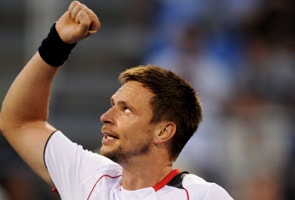 Defending champion Andy Roddick beat Kevin Anderson of South Africa 6-2, 4-6, 6-2 on Saturday to advance to the final of the Brisbane International against top-seeded Robin Soderling of Sweden.

In the women's final, Petra Kvitova of the Czech Republic beat Andrea Petkovic of Germany 6-1, 6-3.

Roddick extended his Brisbane International record to 9-0, looking in complete control when he took a 4-0 lead after 18 minutes, taking the first set in 31 minutes.

He only looked troubled for the first time when play was postponed early in the second set after a spectator appeared to faint, and Roddick drew cheers from the crowd as he offered a water bottle to the fan.

Anderson's booming serve kicked into gear in the second set, yet the lanky South African looked to be on a roll when he broke Roddick in the 10th game to even the match. Roddick didn't panic after dropping a set for the first time at the tournament and closed out the match quickly.

Roddick said his "gamble" to play the Brisbane International ahead of the Australian Open paid off.

"Any time you can get five matches in, it's a good thing," he said. "It's a little bit of a gamble playing and then having a week off -- if it doesn't go right here you have a bit of time in between."

In the second set, Stepanek saved a match point in the 10th game and broke Soderling's service, ending the Swedish player's run of 37 straight service game wins in Brisbane. But Soderling broke back in the 11th game, then held service in the 12th to win the match.

Soderling said he was feeling confident ahead of the Australian Open, which begins Jan. 17.

"He is a player I don't really like to play against because he mixes up his game a lot," Soderling said. "But today I was able to handle it really well -- that's why I am really happy with today's match.

"The final is the match you really want to win, but if I am going to lose tomorrow I still feel like I have had a very good week of preparation before Melbourne."
Comments
Andy RoddickRobin SoderlingBrisbane International