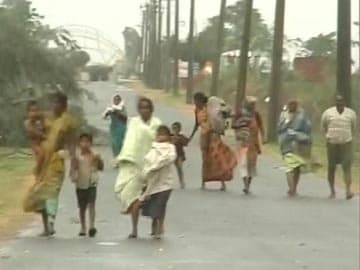 Hyderabad: Barely a week after being hit by cyclone Helen, Andhra Pradesh is now bracing for "very severe" cyclonic storm "Lehar" that is expected to make landfall in the state on Thursday, packed with wind speed reaching up to 200 kmph.

Lehar, expected to be almost same in intensity as cyclone Phailin, is likely to cross the state between Machillipatnam and Kalingapatnam near Kakinada, nearly 465 km east of capital Hyderabad, around noon of November 28.

Under the influence of the system, many places in north coastal Andhra Pradesh and south coastal Odisha are likely to witness moderate rainfall commencing from tomorrow.

The weather department has warned that storm surge of about 2.0-3.0 metres could inundate low lying areas of west and east Godavari, Vishakhapatnam and Krishna districts at the time of the landfall.

In the wake of the alert, all educational institutions in East Godavari district have been ordered to remain closed on Wednesday and Thursday. Shops and business establishments will remain shut on Thursday.

The government has sought four helicopters and 15 additional teams of the National Disaster Response Force (NDRF) from the central government to meet any contingency.

The Army, the Navy and the Coast Guard have been alerted. Fishermen have been asked not to venture into the sea while those already in the sea have been directed to return.

The latest warning has triggered fear among residents of coastal areas of the state that has already witnessed two cyclones since October.

Promoted
Listen to the latest songs, only on JioSaavn.com
Cyclone Helen hit the Andhra Pradesh coast on Friday last, forcing authorities to evacuate thousands of people. It left six people dead and caused extensive damage to standing crops in that state.

Cyclone Phailin devastated lives and damaged properties in more than 17 districts in Odisha after making landfall on October 12 night near Gopalpur in Ganjam district. It also caused extensive damage in Andhra Pradesh.