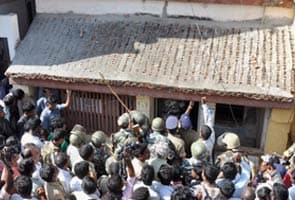 Puttur: Two suspected fundamentalists were today nabbed after a 10-hour-long joint operation by the Tamil Nadu and Andhra Pradesh police outside their house in Puttur in Andhra Pradesh's Chittoor district. A cop was also critically injured in the encounter.

The duo, Panna Ismail and Bilal Malik, are accused by the Tamil Nadu Police of having a role in the murder of the Vice President of the BJP's Tamil Nadu unit, Auditor Ramesh, and Velliappan, an office-bearer in the state unit of Hindu Munnani, a socio-religious organization.

A police team, including commandos from Andhra Pradesh's anti-terrorism unit, Organisation to Counter Terrorist Operations or OCTOPUS, surrounded the suspects' house early this morning. The two men attacked a police inspector with a sharp weapon before rushing inside and locking themselves up.

Promoted
Listen to the latest songs, only on JioSaavn.com
"Police had to open fire in self-defence. Panna Ismail was injured. He has been rushed to hospital," said K Ramanujam, Director General of Police, Tamil Nadu. Cops said that the wife and three children of Malik, who were also present inside the house during the operation, are safe.

Tamil Nadu police had reached Puttur last night following a tip-off about the suspects' hideout after the arrest of another wanted man, Fakruddin, earlier on Friday near the Tamil Nadu-Andhra Pradesh border. Fakruddin is accused of planting a "pipe bomb" in Madurai during senior BJP leader LK Advani's visit to the state in 2011, and carried a reward of five lakh rupees on his head.
Comments
ChittoorAndhra Pradesh encounter