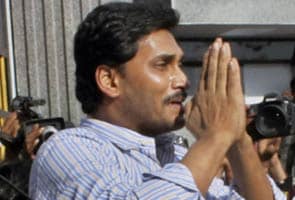 Hyderabad: YSR Congress Party (YSRCP) would organise a public meeting in Hyderabad on October 19 in support of united Andhra Pradesh.

The party president YS Jagan Mohan Reddy, who is out on bail in the corruption case filed against him, had announced yesterday that a meeting would be held on a convenient day between October 15 and 20.

His party has chalked out a month-long mass-contact programme beginning tomorrow till the Andhra Pradesh formation day on November 1 in support of its demand of keeping the state united.

"We will begin the programme with a day's fast on October 2 by leaders of our party in 175 Assembly constituencies spread over 13 districts and will culminate with all panchayats holding a meeting and passing resolution to keep the State united," YSRCP leader Konathala Ramakrishna told reporters.

Promoted
Listen to the latest songs, only on JioSaavn.com
"We also call upon the supporters of united Andhra Pradesh to extend their support to our programme and also to the public meeting which we are going to organise in the city on October 19," he added.