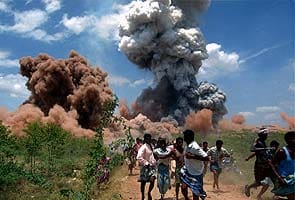 Madurai: After being on the run for four days, the owner of Om Sakthi Crackers factory was finally arrested in Madurai today. On Wednesday, a major fire had broken out in the factory located in Sivakasi in Tamil Nadu, claiming 38 lives and injuring 60 others.

Mr Murugesan, who held the licence to run the factory, had leased it to Mr Pandi, which was illegal. Cases have been registered against the lease holders and owner under various sections of IPC and Explosives Act.

More than 40 violations of safety norms like over-crowding, wrong mixing of chemicals and overstocking, have allegedly been discovered. The state Explosives Department had suspended the factory's licence on Tuesday. The factory should not have been running operations on Wednesday, the day of the fire.

Most of those killed were relatives of workers and others standing anxiously outside the factory and the fire raged. They were hit by stone splinters and even by the firecrackers called "rockets". Some of these bystanders fell ill from the strong fumes.

Over 300 workers were believed to have been inside the factory when the fire broke out on Wednesday afternoon. But most of them reportedly managed to escape the building.

Promoted
Listen to the latest songs, only on JioSaavn.com
All 60 rooms in the factory building were gutted. These included 20 rooms that stored chemicals. The fire also spread to godowns about 200 feet away. Two of the three godowns in the factory were burnt down.

Sivakasi is India's biggest hub for the manufacture of matches and fire crackers. Work to meet the Diwali demand for crackers has been on in full swing in Sivakasi factories and factories have employees at work in full strength.