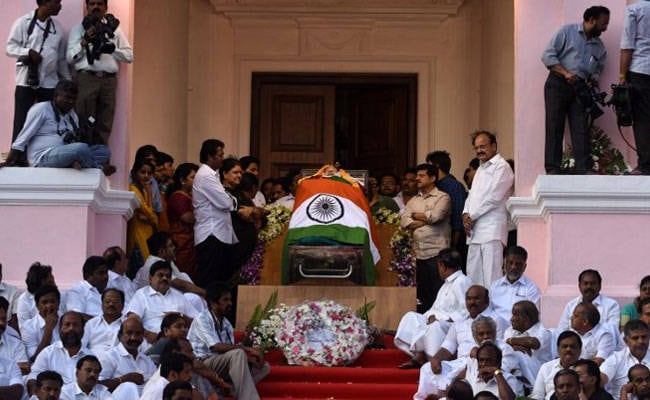 Chennai: Silent processions were taken out and prayer meetings held for the third day today in several places in Tamil Nadu to condole the passing away of former Chief Minister J Jayalalithaa.

People continued to throng the MGR Memorial here, where Jayalalithaa was laid to rest, and they paid homage and offered prayers.

City Police Commissioner S George visited the site and held consultations with officials over various arrangements so that the people can pay their homage smoothly.

Also, people continued to flock the Poes Garden residence of Jayalalithaa, where she lived for over 30 years.

A sand sculpture was carved out on the Kanyakumari beach using about nine tonnes of sand where people paid homage by showering flower petals.

Party cadres lit lamps and candles before the portrait of Jayalalithaa and offered prayers at prominent locations here, Tiruchirappalli, Madurai, Coimbatore and other places across Tamil Nadu.

Promoted
Listen to the latest songs, only on JioSaavn.com
Silent processions were taken out in places including Mamallapuram in Kanchipuram district and Kodaikanal where thousands of men and women participated. Cadres cutting across party lines participated in the Kodaikanal silent march.

AIADMK workers in Tiruchirappalli demanded that the Poes Garden residence of Jayalalithaa be converted into a memorial.