Over 100 Elephant Deaths in Kerala in Last Nine Months 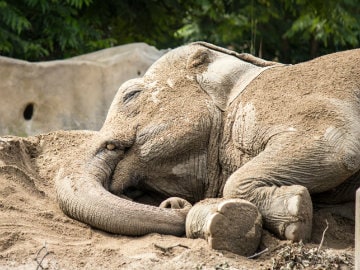 Thiruvananthapuram: Over 100 elephants, 85 of them non-captive, have died in Kerala in the last nine months due to various reasons, according to an animal rights outfit.

A total of 106 cases of jumbo deaths have been reported across the state during the period and unreported deaths will take the toll higher, the Kerala-based Heritage Animal Task Force said.

Of the total wild elephants that died, 12 were male, 60 female, three 'makhnas' (tuskless male jumbos) and 10 calves, the statistics compiled by the outfit said.

However, the Kerala Forest Department officials said they cannot confirm the figures as they are yet to compile a full-fledged data on the death of elephants this year.

"We are yet to compile the elephant mortality data of the current year. We can say a final word on this only after collecting complete data from each forest division," O P Kaler, Additional Principal Chief Conservator of Forest told PTI.

"But, even if the total number of 85 wild elephant deaths is true, it is normal rate going by the total wild elephant stock of the state which is 6,177 as per the 2012 census," he said.

As far as Kerala is concerned, the mortality death of wild elephants up to two to three per cent is normal, he said.

According to Task Force figures, most of the wild elephant deaths have been reported inside the forests of Wayanad, bordering Karnataka and Tamil Nadu. A total of 23 wild elephants died due to various reasons in the region.

As many as 21 jumbos died inside Thekkady and Sabarimala forest areas and 15 inside forest areas in Palakkad, Kanjikode and Mannarkad.

Thirteen were found dead inside forest areas of Malayattur, Edamalayar, Athirappilly and Vazhachal region which includes elephant corridors, the development of which was financed by the UNESCO.


Task Force secretary V K Venkitachalam said the non-implementation of welfare measures and lapses in laws are root causes of the jumbo deaths.

"It is high time that we implemented a comprehensive programme for the safety of wild as well as captive elephants.

The plight of the Asiatic elephants in the subcontinent is yet to get due attention," he told PTI.

Of the 21 captive elephants died during the period, 19 were young males, one makhna and one female, he said.

Over work, poor upkeep and old age were some of the reasons for the "spurt" in the death of captive elephants in the state, he said.

Promoted
Listen to the latest songs, only on JioSaavn.com
Thrissur, famous for its "Pooram" festival in which a large number of caparisoned elephants are paraded, accounted for most of the captive elephant deaths during the period.

The latest in the list was a 37-year-old jumbo named Paananchery Devanarayanan who died due to constipation.
Comments
ElephantsdeathsKeralaHeritage Animal Task Force