Jagan must be punished for Tirumala visit, say Congress leaders 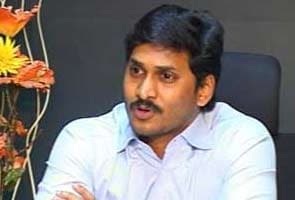 Hyderabad: A day after YSR Congress party leader Y.S. Jaganmohan Reddy's visit to Tirumala temple kicked up a row, leaders of the ruling Congress and the main opposition Telugu Desam Party (TDP) on Thursday demanded action against him for flouting temple rules.

The leaders of both the parties accused Jaganmohan Reddy, a Christian, of showing disrespect to other religions and disturbing the sanctity of the Balaji temple.

Mr Rao alleged that Mr Jagan, as Jaganmohan Reddy is popularly known, was behaving like an extra-constitutional authority. "He is displaying his arrogance even before the God," he said and found fault with the government for keeping quiet.

Another Congress leader and legislator P. Sudhakar Reddy demanded that both the government and the Tirumala Tirupati Devasthanam (TTD), which manages the affairs of India's richest temple, to order a probe.

Mr Jagan on Wednesday visited the temple but refused to sign the register kept for the non-Hindu visitors. Before entering the temple, non-Hindus have to sign a register declaring faith in Lord Venkateshwara.

According to TTD officials, the son of late chief minister Y.S. Rajasekhara Reddy argued that as he had visited the temple and signed the register in 2009, there was no need for him to sign again.

He also reminded them that his father visited the temple several times and also offered silk clothes and gifts to the lord on behalf of the state government.

Executive officer of the TTD L.V. Subramanyam said it was being ascertained whether it was necessary to sign the declaration every time a person visited the temple.

TDP leader and former minister S. Chandramohan Reddy alleged that Mr Jagan had no respect for other religions.

He alleged Mr Jagan desecrated the sacred place as the people accompanying him raised slogans of "Jai Jagan".

State's Endowments Minister C. Ramachandraiah found fault with Jagan's supporters causing disturbance in the temple. He told reporters that those visiting the temples should come with the faith in God and not with any political motives.

Promoted
Listen to the latest songs, only on JioSaavn.com
He said there was a ban on campaigning on the hills and raising slogans. However, no action could be taken against those not following the tradition and raising political slogans as there was no legislation in this regard.