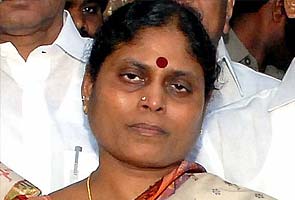 Speaking on the occasion in Guntur, Mrs Vijayamma alleged that the Congress party was acting in an "authoritarian" manner to bifurcate the state for political gains.

She said the Congress had failed to do justice to all the regions.

Mrs Vijayamma and 16 other party legislators have submitted their resignations to the state assembly speaker.

They had planned to launch the indefinite fast at Vijayawada, but police refused permission in view of the election code of conduct for by-elections to the Avanigadda assembly seat in Krishna district.

Mrs Vijayamma said her husband YS Rajasekhara Reddy tried to do justice to all three regions of the state.

She said he launched many schemes for the development of backward and drought-prone districts. "YSR Congress stands for equal justice to all regions," she said.

Mrs Vijayamma told the gathering that she had taken up the fast on behalf of her son YS Jagan Mohan Reddy, who is in jail for more than a year in an alleged disproportionate assets case.

Political observers said her fast is aimed strengthening the party position in Seemandhra (Rayalaseema and Andhra regions) as she is reconciled to the fact that whatever little base the party had in Telangana was eroded after it opposed the centre's decision to carve out a separate state.

Almost all leaders of the YSR Congress in Telangana quit the party after its legislators resigned to protest the bifurcation.

Promoted
Listen to the latest songs, only on JioSaavn.com
Jagan Mohan Reddy and another party MP, M Rajamohan Reddy, have also sent their resignations to the Lok Sabha speaker.