In India's Newest State, 101 Farmers Kill Themselves in Two Months 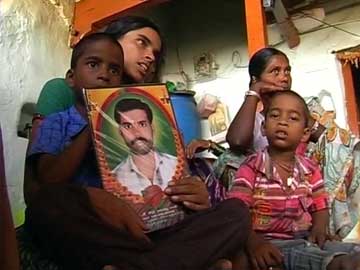 Beeraiah leaves behind his wife Manjula and two sons.

Thimmakapally, Medak: In the last two months, since the creation of Telangana, 101 farmers have killed themselves in India's newest state, according to statistics compiled from police records.

Telangana has reported the worst monsoon deficit in the country this kharif season.

"I don't see too many chances of a recovery," says Lakshman Singh Rathore, director general of the Indian Meteorological department, while talking about the grim situation in the state.

The inadequate monsoon has driven many farmers to the edge of despair. One of them is Beeraiah, a 28-year-old farmer from Thimmakapally village in Medak district.

His family members still can't believe it. Beeraiah, they say, was confident and resourceful. How could someone -- who often urged others not to lose hope -- just give up, they ask in disbelief.

"I thought my son would look after me in old age. Now I have to keep myself alive so his children don't starve," says his 65-year-old father Singaiah.

"Even with a good crop, we would just have enough to survive. We were never able to repay loans. But what else could we do,'' says Beeraiah's 24-year-old wife Manjula. She now has to find a way to take care of her two sons -- 7-year-old Jaswant and 5-year-old Devender.

Many farmers who have taken the extreme step in Telangana are young men like Beeraiah.

They are hard workers and they are resourceful, but they fail to find any hope in agriculture and they have nowhere else to go. This is the story we found in village after village, district after district, in Telangana.

While critics say the government has failed to help the farmers, the Telangana government squarely blames decades of neglect by authorities from Seemandhra region.

Promoted
Listen to the latest songs, only on JioSaavn.com
"I will only blame the political system, the Seemandhra leaders and their mindset. They never tried to give water to Telangana farmers," says State Irrigation Minister T Harish Rao.

Most farmers here are now in no position to plant a new crop even if the region receives some rainfall later in the season. They have no money to do so.