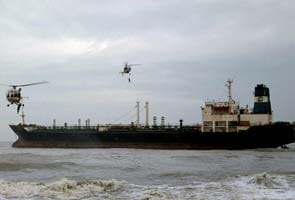 Chennai: The Madras High Court today ordered the owner of an oil tanker, which ran aground near Chennai, to deposit Rs six crore in case it was moved out of Chennai port.

Justice N Paul Vasanthakumar said if MT Pratibha Cauvery was to be moved, the owner shall deposit the amount in favour of the Court Registrar General as six crew had already died in the incident.

Five persons went missing and a sailor died on October 31 when some of the crew members attempted to reach the shore after their ship ran aground when cyclone Nilam made landfall. Later, the bodies of the five persons were found and handed over to relatives.

Pending further orders, the ship shall not be moved from the territorial jurisdiction of the Madras High Court, the judge said.

Sankara Narayanan, brother of a deceased sailor Anand Mohandoss, in his petition had submitted that the ship was not seaworthy and that the shipping company had not provided food, treatment or salaries to its crew.

The matter has been posted for hearing on November 9.
Comments
grounded ship