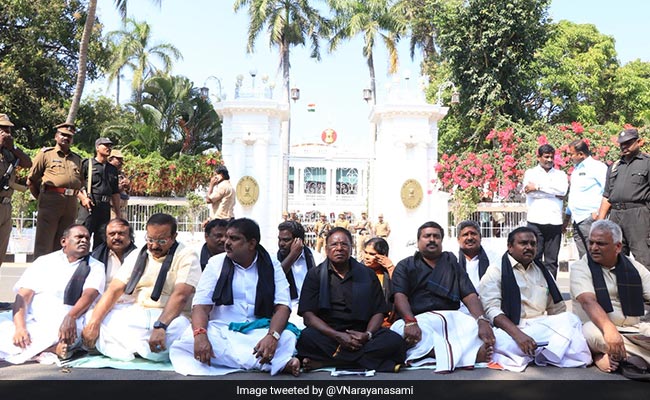 Puducherry Chief Minister V Narayanasamy and his ministers are sitting in protest on the road outside Lieutenant Governor Kiran Bedi's residence, in the latest round of stand-off between the Congress government and the former IPS officer.

V Narayanasamy led the sit-in against the rule making wearing helmets compulsory for motorists. While Kiran Bedi wants immediate implementation of the rule, Mr Narayanasamy wants it to be done in a phased manner. He also wants a recall of Kiran Bedi as the Lieutenant Governor of Puducherry.

Wearing a black shirt and a black veshti, Mr Narayanasamy sat on the road outside the Raj Nivas. Other ministers and legislators wore black towels around their necks and sat next to the chief minister. Mr Narayanasamy said he will spend the night outside Kiran Bedi official residence.

On Sunday, Ms Bedi had said the law secretary of Puducherry had requested the Madras High Court to deploy a mobile magistrate traffic court in the Union Territory to ensure motorcyclists wear helmets. "Police Department has decided to make wearing of helmet compulsory from Monday," she tweeted yesterday.

In a tweet, Mr Narayanasamy alleged that Kiran Bedi is yet to resolve 39 pending issues which were raised and sent to her. These include the release of funds, payment of salaries and approval of projects.He also accused Ms Bedi of interfering in the day-to-day activities of the government.

On behalf of Govt, 39 pending issues have been raised & sent to @LGov_Puducherry to reslove issues immediately since its responding to people of UT & its development. No response till now. So myself, Hon. Mins , MLAs sit on dharna in front of #RajNivas for people of #Puducherrypic.twitter.com/76aSw5ygBb

On Tuesday, legislators of the opposition AIADMK broke helmets on the premises of the Puducherry assembly over the mandatory helmets rule. They also flayed her style of functioning which, they said, was arbitrary.

"Law makers or breakers in Puducherry?" Ms Bedi tweeted on the AIADMK protest.

Kiran Bedi, who was in charge of traffic in Delhi, had turned traffic cop on Sunday to raise awareness on road safety. During a campaign to mark National Road Safety Week, Ms Bedi stopped two-wheelers on a busy road in Puducherry and asked bikers to wear helmets. She alleged that V Narayanasamy's government is stopping the enforcement of road safety rules.

Kiran Bedi, has been at loggerheads with the Puducherry government on various issues. Mr Narayanasamy and the Congress have accused her of delaying clearance to welfare schemes, bypassing the elected government and criticised her weekly field visits.