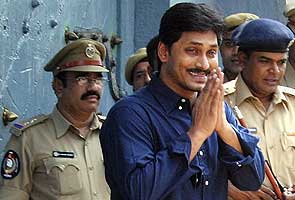 Hyderabad: A special CBI court today adjourned to October 9 the hearing in a disproportionate assets case in which YSR Congress chief Jagan Mohan Reddy is the prime accused. This was Mr Reddy's first appearance in two months after he cast his vote in the Presidential election on July 19. He was brought from Chanchalguda jail to the Nampally complex in Hyderabad on prisoner transit.

Andhra Pradesh Roads and Buildings Minister Dharmana Prasada, who also appeared in court today in connection with the case, was released after furnishing sureties. The CBI did not seek his police custody.

Dharmana Prasad Rao has been chargesheeted by the CBI in the 2008 Vanpic infrastructure project - the construction of ports and an industrial corridor in the Prakasam and Guntur districts, intended to industrialise this largely-agricultural area. At the time, Mr Rao was Revenue Minister. The CBI says that the Vanpic deal was riddled with irregularities. He was named as the fifth accused in the fourth chargesheet filed by the CBI on August 14 on charges of criminal conspiracy and cheating under relevant sections of IPC and Prevention of Corruption Act.

Mr Rao had submitted his resignation to Chief Minister Kiran Kumar Reddy after being named in the case. His resignation, however, has not yet been accepted by Mr Reddy.

Jagan Mohan Reddy has spent four months in a Hyderabad jail on charges that include criminal conspiracy and corruption. The case against Mr Reddy states that he used his father's position as chief minister to push industrialists to invest in his businesses. 26 government orders reportedly helped facilitate favours to these companies in exchange for quid pro quo investments in companies owned by the chief minister's son.

The Supreme Court has adjourned his bail plea to September 28 after CBI opposed the plea, saying Mr Reddy could influence the case if released.

Promoted
Listen to the latest songs, only on JioSaavn.com
(With input from PTI)