Director General of Police DG Sawang placed Inspector Venugopal under suspension and ordered an inquiry into the incident. 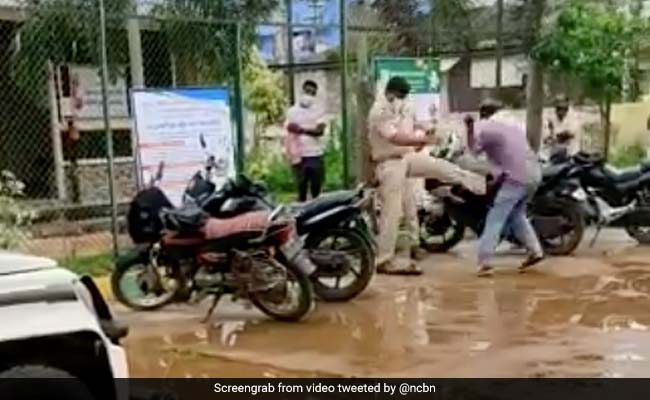 The inspector was seen kicking a man in the viral video

A police inspector in Srikakulam district was on Wednesday placed under suspension after a video clip of him allegedly kicking and abusing a Dalit man went viral.

Director General of Police DG Sawang placed Inspector Venugopal under suspension and ordered an inquiry into the incident.

This is the third incident within a fortnight when police personnel have allegedly behaved in a highhanded manner against Dalit men.

In the first incident, a Dalit man was allegedly tonsured and beaten up  by the police and in the second case, a Dalit man died after the local police allegedly beat him up.

As former Chief Minister N Chandrababu Naidu tweeted the Srikakulam video clip and alleged that the ruling YSR Congress men were behind the incident, the DGP responded by saying, "There is no involvement of any political party as alleged."

The Srikakulam district Superintendent of Police Amit Bardar visited the Dalit man Marri Jagan's house and enquired about the incident.

Deputy Chief Minister (Revenue) Dharmana Krishna Das, who comes from the district, condemned the inspector's behavior and said the government was committed to the protection of Dalits.

He said the Visakhapatnam Range Deputy Inspector General of Police has been asked to conduct an inquiry and submit a report.

It all happened when Marri Jagan went to lodge a complaint against an attack on him by some YSRC men after he questioned them over the house-sites issue.

The video footage shows the inspector standing outside the police station when Mr Jagan approaches with his mother.

The inspector is seen kicking and also beating the man.

A video was later circulated in which Mr Jagan claimed that the inspector was not in the wrong and that he spoke in a rash tone.

"The inspector chided me for speaking in such a tone. He was so courteous towards me. He made me sit inside the police station and gave me lunch and cautioned me against getting into any tussle with others," Mr Jagan is purportedly heard saying, as someone is heard in the backgorund prompting certain words.

He said some Dalit organisations, media and political parties were trying to politicise the issue.

Mr Jagan's mother claimed the inspector treated her like a mother and that "he looked like my son."