Watch a YouTube video featuring a young woman speaking in a breathy whisper as she pretends to give you an ear massage. 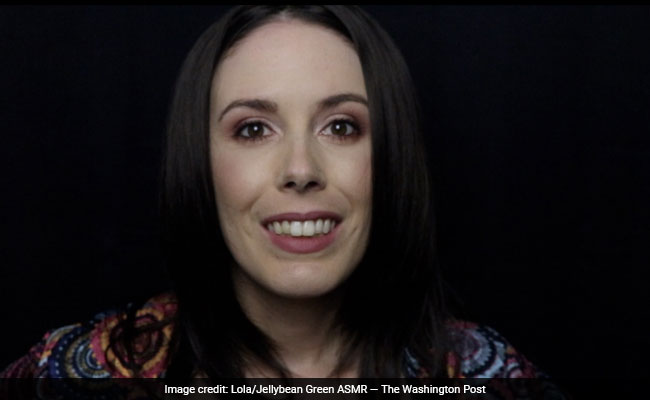 The niche phenomenon has increasingly crept into mainstream culture

In the final weeks of pregnancy, when sleep and serenity are often so elusive, there are certain tried-and-true tips to help an expectant mother relax and rest: Do gentle yoga stretches. Tuck a body pillow between your knees. Sip a cup of warm camomile tea.

And maybe watch a YouTube video featuring a young woman speaking in a breathy whisper as she pretends to give you an ear massage.

"When I found those videos, oh, they were a godsend," says Melissa Shaw, 34, a retail manager from Oregon who gave birth to her daughter in November. "I was at that point in my pregnancy where I couldn't take anything to sleep and I was so physically uncomfortable. I was up all night, super jittery and agitated, and all of a sudden, finally, I'd found something that could soothe me to sleep and it wasn't medical and had no side effects."

Shaw was in her third trimester when a friend first pointed her to the videos on YouTube, and she learned the name for the physical reaction they induced: ASMR, or autonomous sensory meridian response, which is often described as a cascade of pleasant tingles that begins in the crown of the head and ripples throughout the body, instilling a sense of deep relaxation. (If you're someone who gets goose bumps when someone whispers into your ear or plays with your hair, that's ASMR.)

The niche phenomenon has increasingly crept into mainstream culture, most recently making its Super Bowl debut in a Michelob Ultra beer commercial starring actress Zoe Kravitz, who whispered into a microphone and tapped her nails against a beer bottle. On YouTube, a vast trove of tranquility-triggering videos posted by "ASMRtists" have amassed tens of millions of views.

But ASMR might have a particularly potent effect for pregnant women, as the hormone most closely linked to the phenomenon - oxytocin - is often elevated during pregnancy, and also plays a critical role during labor and breast-feeding. A recent study showed that ASMR activates the same areas of the brain that have long been associated with bonding and soothing behaviors. That might explain why some soon-to-be moms are turning to ASMR, and why a small but growing number of ASMRtists are making videos - mimicking prenatal massage, or role-playing as doulas - that cater specifically to pregnant people.

"I have my favorite videos that I go to all the time, and there's just something so soothing and so soft about them," says Maria, YouTube's preeminent ASMRtist with more than 1.6 million subscribers to her "Gentle Whispering" channel. Maria (who, like most ASMRtists, keeps her full name private to protect her security because her work sometimes attracts unwanted attention) is expecting her first child this month and says she was surprised to find that her sensitivity to ASMR has been notably heightened during her pregnancy.

"Hearing a motherly, soothing voice before I go to sleep has been very helpful," she says. "I watch the videos to distract myself from the worries about motherhood, and to help me fall asleep. I have so many pregnant ladies who write me messages saying that they're going through the same thing."

Such anecdotes come as no surprise to Craig Richard, a professor and researcher at the Shenandoah University School of Pharmacy in Winchester, Virginia, and the founder of the blog ASMR University. After years of gathering survey data about ASMR, Richard has his own ideas about why certain people, and pregnant people in particular, might be especially susceptible.

"Increasing levels of oxytocin happens naturally during pregnancy, and oxytocin is the brain chemical most associated with the triggers and stimuli of ASMR," he says. "When I'm asked why I think some people experience ASMR and some don't, my best guess is that I think the people who experience it are producing increased amounts of oxytocin."

Research on ASMR is still in its earliest stages, Richard says, but last year he co-wrote the first published fMRI study of the sensation, tracking the brain activity of 10 study participants at Dartmouth College by detecting changes in blood flow when they experienced ASMR.

"What we saw in the data is that there are clearly certain parts of the brain that show increased activity during ASMR tingles," Richard says. "When looking at those regions of the brain that were activated, it does show a general brain state that is compatible with our understanding of how the brain reacts to being soothed."

All of this reaffirms what Richard calls the "origin theory" of ASMR - that the reaction can be traced back to the bond between a parent and child, and the safety and comfort we receive from soft-spoken words and gentle touch in infancy and childhood.

"When parents tuck in a child to sleep, they read them a story in a soft voice, they cuddle next to them, they give them personal attention, they may play with the child's hair to help them relax and go to sleep," he says. "The patterns and behaviors in ASMR videos are those same ones that are used by parents to soothe infants and children."

For Lola, the ASMRtist behind "Jellybean Green ASMR," who also asked that her last name be withheld for her security, ASMR offered a vital refuge during three difficult pregnancies. She struggled with prenatal anxiety and depression as well as other medical issues, she says.

"There's an enormous amount of cultural pressure surrounding pregnancy; we're surrounded by images of pregnant women who are glowing, excited and participating in all the popular rituals for preparing for childbirth - like doing prenatal yoga and designing themed nurseries. These images were so far removed from my reality, and I felt like I was failing a rite of passage," she says. "ASMR videos were my one escape."

Lola felt mostly drawn to what are referred to as "personal attention role plays," where an ASMRtist might pretend to give the viewer a haircut or an ear exam, or even just a pep talk.

"It brings me right back to when I would be sick as a small child and my mother would hold and comfort me," Lola says. "Those videos were like a little island of calm at a time when I was drowning in discomfort and worry."

Maria says she prefers videos that aren't specifically focused on pregnancy - "They help distract me from concentrating on issues or worries I'm having" - and she hasn't created pregnancy-themed videos herself. But when Lola was pregnant, she searched for videos that specifically acknowledged the concerns many expectant mothers feel.

"I decided to create my own pregnancy-focused ASMR videos during my second pregnancy," she says. "Despite there being hundreds of thousands of ASMR videos out there, I could only find maybe five or six that specifically focused on comforting pregnant people, and that was really disappointing."

That was about three years ago, and since then, a slowly growing number of pregnancy-themed ASMR videos have attracted tens of thousands of views on YouTube. That can't quite compare to the general-interest ASMR videos that rack up millions of views, but Lola thinks of her pregnancy videos as "narrow appeal, high value," she says: "Their precise nature makes them deeply meaningful for the people for whom they're created."

Those people include Katherine Anderson Ahlstedt, an American expat living with her husband in Sweden. The couple are expecting their second daughter in March, and watching Lola's prenatal-themed videos has become part of Ahlstedt's nightly relaxation routine.

She says she wishes more ASMRtists would make videos like these.

"Any woman who has been through it will surely tell you how important it is to be connected to and supported by a female community during pregnancy," Ahlstedt says. "ASMR has a huge potential in being able to provide this emotional, psychological and physical support to pregnant women."

Beyond inducing the usual pleasant tingling sensation, Ahlstedt says, she is especially soothed by Lola's gentle affirmations, acknowledging the challenges and anxieties that often come with pregnancy.

Last week, Lola posted her newest pregnancy-themed video, simulating a prenatal scalp massage. Within a day, the video had been viewed more than 6,000 times, and dozens of pregnant viewers posted grateful comments:

"36 weeks tomorrow on bedrest and I needed this!! Thank you thank you!!"

"30 weeks and this is just perfect. Thank you."

"I have been looking for something just like this, thank you so much!!"

The video, Lola says, was especially for women who might be having a tough time with their pregnancies.

"I can promise you, you're doing great," Lola murmurs in the video, her words slow and soft. "You're beautiful, you're amazing, and you're strong. You can do this."