Instead of a triplet, the new song ended in a doublet and a new syncopation pattern. The new ending sounded like "Ca-na, Ca-na, Ca-na." 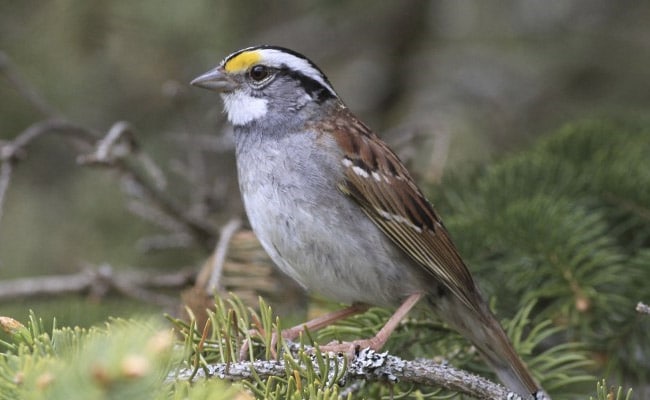 Members of a Canadian sparrow species famous for their jaunty signature song are changing their tune, a curious example of a "viral phenomenon" in the animal kingdom, a study showed Thursday.

But starting from the late 20th century, biologists began noticing that members of the species in western Canada were innovating.

Instead of a triplet, the new song ended in a doublet and a new syncopation pattern. The new ending sounded like "Ca-na, Ca-na, Ca-na."

Over the course of the next two decades, this new cadence became a big hit, moving eastward and conquering Alberta, then Ontario. It began entering Quebec last year.

It's now the dominant version across more than 2,000 miles (3,000 kilometers) of territory, in an extremely rare example of the total replacement of historic bird dialect by another.

Scientist Ken Otter at the University of Northern British Columbia, and his colleague Scott Ramsay from Wilfrid Laurier University, described the dizzying pace of this transformation in the journal Current Biology.

"What we're seeing is like somebody moving from Quebec to Paris, and all the people around them saying, 'Wow, that's a cool accent' and start adopting a Quebec accent," Otter told AFP.

Their work was based on 1,785 recordings between 2000 and 2019, the majority made by them but with contributions from citizen-scientists, who posted the files on specialist sites like xeno-canto.org.

In the western province of Alberta, about half of the recorded songs ended with the triplet in 2004; ten years later, all the males had adopted the doublet.

In 2015, half of western Canada had converted to the doublet version, and by last year, the new song had been well established on the western tip of eastern Quebec province.

At this rate, the historic triplet version may soon exist only in tape recordings.

The males of the species sing to mark their territory, and their songs all share a common structure. Usually, if a variation appears, it remains regional and doesn't make headway in neighboring territories.

The study represents the first time scientists have been able to show this kind spread at huge geographic scale, said Otter.

So how did it happen?

Probably in the same way that children return from summer camp humming new tunes: songbirds from different parts of Canada winter in the same parts of the United States, then return to their own homes in spring.

The researchers verified this theory by tagging a few of the birds.

So it was that in the plains of Texas and Kansas, the new song's first adopters from western Canada -- avian influencers, if you will -- popularized the trend among their eastern brethren.

Previous work has shown that young birds can pick up a foreign song after listening to a recording.

But to truly understand why the males were willing to abandon the old song that had once served them well, the scientists have to rely on theories.

Otter believes it may be because females were more attracted to the new song, so young males rushed to adopt it.

"There seems to be some advantage to adding novel elements into your song that make the song, not necessarily more attractive, but increases people's attention to it," said Otter.

Going back to the human example, it would be akin to "if all the French women in Paris thought that a Quebec accent sounded much more interesting than a Parisian accent, and so everybody starts adopting a Quebec accent."